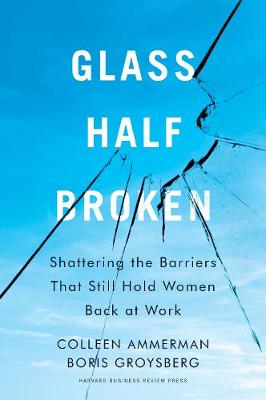 Glass Half-Broken: Shattering the Barriers That Still Hold Women Back at Work

Description - Glass Half-Broken: Shattering the Barriers That Still Hold Women Back at Work by Colleen Ammerman

Why the gender gap persists and how we can close it

Women have made up roughly half of the college-educated workforce for years, and before the onset of the economic crisis of 2020, the gap between the percentage of women and the percentage of men in the labor force was the lowest on record. But women remain underrepresented in positions of power and status. The gender pay gap, for example, shows little movement, largely because high-paying jobs are the most gender-imbalanced. Even in areas where there are roughly equal numbers of men and women, or where women actually make up the majority, leadership ranks remain male-dominated.

The endurance of these inequalities begs the question: Why haven't we made more progress? A 2020 analysis by a team of sociologists affirms that progress, as measured by rates of women's employment, earnings, and the types of fields and jobs they work in, has either stalled completely or slowed.

With fifty years of sweeping reforms in educational and corporate policy, it's tempting to think that any remaining gender imbalances reflect differences in individual merit or behaviour, not organisational barriers. Much of the popular media supports this idea, with countless books and articles offering advice on what women should do to overcome challenges: lean in, speak up, do power poses, stop apologising, and delegate more.

Ammerman and Groysberg focus instead on the pervasive organisational obstacles and managerial actions that create gender imbalance. Bringing to light the key findings from the latest research in psychology, sociology, and economics, Glass Half-Broken shows that along their entire career path - from entry- to mid- to senior-level positions - women get pushed out of the leadership pipeline and, at each point, for different reasons. Presenting institutional and managerial strategies designed to overcome and mitigate these barriers at each step in the career path, Glass Half-Broken is the authoritative resource that managers and leaders at all levels can use to finally shatter the glass ceiling.

» Have you read this book? We'd like to know what you think about it - write a review about Glass Half-Broken: Shattering the Barriers That Still Hold Women Back at Work book by Colleen Ammerman and you'll earn 50c in Boomerang Bucks loyalty dollars (you must be a Boomerang Books Account Holder - it's free to sign up and there are great benefits!)