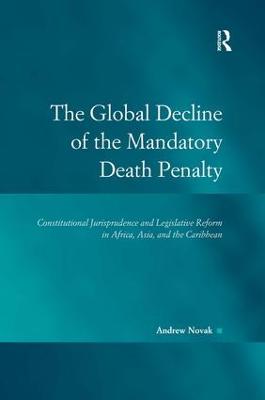 The Global Decline of the Mandatory Death Penalty

Constitutional Jurisprudence and Legislative Reform in Africa, Asia, and the Caribbean

Historically, at English common law, the death penalty was mandatory for the crime of murder and other violent felonies. Over the last three decades, however, many former British colonies have reformed their capital punishment regimes to permit judicial sentencing discretion, including consideration of mitigating factors. Applying a comparative analysis to the law of capital punishment, Novak examines the constitutional jurisprudence and resulting legislative reform in the Caribbean, Sub-Saharan Africa, and South and Southeast Asia, focusing on the rapid retreat of the mandatory death penalty in the Commonwealth over the last thirty years. The coordinated mandatory death penalty challenges - which have had the consequence of greatly reducing the world's death row population - represent a case study of how a small group of lawyers can sponsor human rights litigation that incorporates international human rights law into domestic constitutional jurisprudence, ultimately harmonizing criminal justice regimes across borders. This book is essential reading for anyone interested in the study and development of human rights and capital punishment, as well as those exploring the contours of comparative criminal justice. 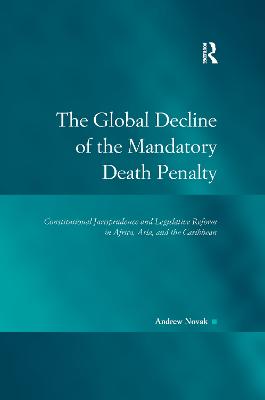 » Have you read this book? We'd like to know what you think about it - write a review about Global Decline of the Mandatory Death Penalty book by Andrew Novak and you'll earn 50c in Boomerang Bucks loyalty dollars (you must be a Boomerang Books Account Holder - it's free to sign up and there are great benefits!)

Andrew Novak is an adjunct professor of African law at American University Washington College of Law and an adjunct professor of criminology, law, and society at George Mason University, where he teaches international and comparative criminal justice. He received a Master of Science in African Politics from the London School of Oriental and African Studies and a Juris Doctor from Boston University School of Law. His articles on the death penalty in Sub-Saharan Africa have appeared in journals such as the Suffolk University Law Review, Loyola Journal of Public Interest Law, Richmond Journal of Global Law and Business, Indiana International and Comparative Law Review, and Boston University International Law Journal.

The Global Decline of the Mandatory Death Penalty: Constitutional Jurisprudence and Legislative Reform in Africa, Asia, and the Caribbean
$94.04 $94.99