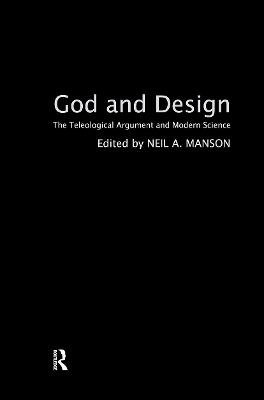 The Teleological Argument and Modern Science

Description - God and Design by Neil A. Manson

Recent discoveries in physics, cosmology and biochemistry have captured the public imagination and made the design argument - the theory that God created the world according to a specific plan - the object of renewed scientific and philosophical interest. Terms such as 'cosmic fine-tuning', the 'anthropic principle' and 'irreducible complexity' have seeped into the public consciousness, and increasingly appear within discussion about the existence and meaning of God. This accessible and serious introduction to the design problem brings together both sympathetic and critical new perspectives from prominent scientists and philosophers including Paul Davies, Richard Swinburne, Sir Martin Rees,Michael Behe, Elliot Sober and Peter van Inwagen. Questions raised include: *What is the logical structure of the design argument? *How can intelligent design be detected in the universe? *What evidence is there for the claim that the universe is divinely finetuned for life? *Does the possible existence of other universes refute ideas of God's unique plan for life? *Is evolutionary theory compatible with the belief that God designed the world?
God and Design probes the relationship between modern science and religious belief, considering their points of conflict and their many points of similarity. Is the real God of creationism the 'master clockmaker', who sets the world's mechanism on a perfectly enduring course, or a miraculous presence who continually intervenes in and alters the world we know? Are science and faith, or evolution and creation, really in conflict at all? Expanding the parameters of a lively and urgent debate, God and Design considers the ways in which perennial questions of origin continue to fascinate and disturb us. (no permission yet so do not use till authorised) 'A major contribution to the ongoing scientific and philosophical debate after Hume and Darwin ...Will prove extremely useful and interesting for scientists and philosophers alike, and provide an important primary source' -Michael Palmer, author of The Question of God. 1. Michael Behe, Lehigh University, Bethelehem 2. Robin Collins, Messiah College, Grantham, USA 3. William LAne Craig 4. Paul Davies 5. William Dembski 6. John Leslie, University of Guelph, Guelph, Ca

Book Reviews - God and Design by Neil A. Manson

» Have you read this book? We'd like to know what you think about it - write a review about God and Design book by Neil A. Manson and you'll earn 50c in Boomerang Bucks loyalty dollars (you must be a Boomerang Books Account Holder - it's free to sign up and there are great benefits!)

A Preview for this title is currently not available.
More Books By Neil A. Manson
View All