The epic that began with the HUGO and NEBULA Award-winning classic DUNE -- now a major motion picture from the director of Blade Runner 2049 and Arrival -- continues ...More than three thousand years have passed since the first events recorded in DUNE. Only one link survives with those tumultuous times: the grotesque figure of Leto Atreides, son of the prophet Paul Muad'Dib, and now the virtually immortal God Emperor of Dune.He alone understands the future, and he knows with a terrible certainty that the evolution of his race is at an end unless he can breed new qualities into his species.But to achieve his final victory, Leto Atreides must also bring about his own downfall ...

Other Editions - God Emperor Of Dune: The Fourth Dune Novel by Frank Herbert 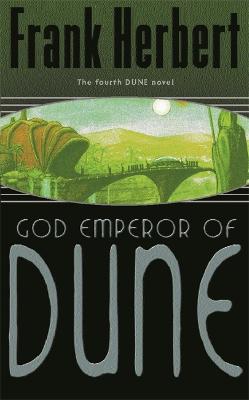 » Have you read this book? We'd like to know what you think about it - write a review about God Emperor Of Dune: The Fourth Dune Novel book by Frank Herbert and you'll earn 50c in Boomerang Bucks loyalty dollars (you must be a Boomerang Books Account Holder - it's free to sign up and there are great benefits!)


A Preview for this title is currently not available.
More Books By Frank Herbert
View All