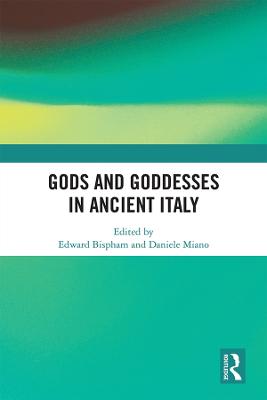 Gods and Goddesses in Ancient Italy

Description - Gods and Goddesses in Ancient Italy by Edward Bispham

This collection explores the multifaceted nature of the gods and goddesses worshipped in ancient Italy. It examines Italic, Etruscan, and Latin deities in context and in the material remains, and also in the Greco-Roman written record and later scholarship which drew on these texts.

Many deities were worshipped in ancient Italy by different individuals and communities, using different languages, at different sanctuaries, and for very different reasons. This multiplicity creates challenges for modern historians of antiquity at different levels. How do we cope with it? Can we reduce it to the conceptual unity necessary to provide a meaningful historical interpretation? To what extent can deities named in different languages be considered the equivalent of one another (e.g. Artemis and Diana)? How can we interpret the visual representations of deities that are not accompanied by written text? Can we reconstruct what these deities meant to their local worshippers although the overwhelming majority of our sources were written by Romans and Greeks? The contributors of this book, a group of ten scholars from the UK, Italy, France, and Poland, offer different perspectives on these problems, each concentrating on a particular god or goddess.

Gods and Goddesses in Ancient Italy offers an invaluable resource for anyone working on ancient Roman and Italian religion.

» Have you read this book? We'd like to know what you think about it - write a review about Gods and Goddesses in Ancient Italy book by Edward Bispham and you'll earn 50c in Boomerang Bucks loyalty dollars (you must be a Boomerang Books Account Holder - it's free to sign up and there are great benefits!)


A Preview for this title is currently not available.
More Books By Edward Bispham
View All