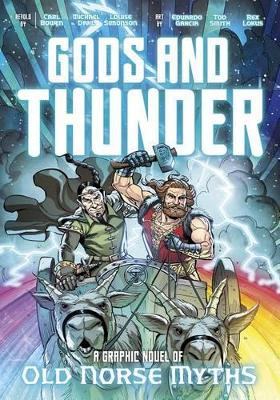 Gods and Thunder - A Graphic Novel of Old Norse Myths

Gods and thunder. Brothers and betrayal. Death and rebirth. Original Viking tales of Asgard, Thor, Loki, Odin, and Baldur come to life in a full-color, action-packed graphic novel format that's perfect for young readers who crave adventure. Prepare yourself for sibling rivalry, ancient prophecies, and epic battles and enter the weird, wild world of Norse mythology like you've never seen it before. AUTHOR: Carl Bowen is a father, husband, and writer living in Lawrenceville, Georgia. He has published a handful of novels, short stories, and comics. For Stone Arch Books and Capstone, Carl has retold 20,000 Leagues Under the Sea (by Jules Verne), The Strange Case of Dr. Jekyll and Mr. Hyde (by Robert Louis Stevenson), The Jungle Book (by Rudyard Kipling), "Aladdin and His Wonderful Lamp" (from A Thousand and One Nights), Julius Caesar (by William Shakespeare), and The Murders in the Rue Morgue (by Edgar Allan Poe). Carl's novel, Shadow Squadron: Elite Infantry, earned a starred review from Kirkus Book Reviews.

» Have you read this book? We'd like to know what you think about it - write a review about Gods and Thunder - A Graphic Novel of Old Norse Myths book by ,Carl Bowen and you'll earn 50c in Boomerang Bucks loyalty dollars (you must be a Boomerang Books Account Holder - it's free to sign up and there are great benefits!)