Description - The Gods Themselves by Isaac Asimov

In the year 2100, the invention of the Electron Pump - an apparently inexhaustible supply of free energy - has enabled humanity to devote its time and energies to more than the struggle for survival, finally breaking free of the Earth.But the Electron Pump works by exchanging materials with a parallel universe, and such unbalancing of the cosmos has consequences. Humans and aliens alike must race to prevent a vast nuclear explosion in the heart of the Sun - and the vaporisation of the Earth exactly eight minutes later. . .

Other Editions - The Gods Themselves by Isaac Asimov 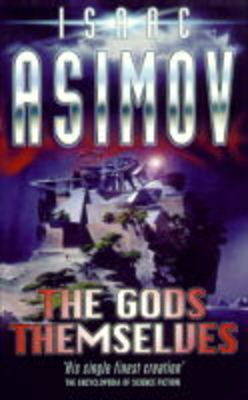 Book Reviews - The Gods Themselves by Isaac Asimov

» Have you read this book? We'd like to know what you think about it - write a review about Gods Themselves book by Isaac Asimov and you'll earn 50c in Boomerang Bucks loyalty dollars (you must be a Boomerang Books Account Holder - it's free to sign up and there are great benefits!)

Isaac Asimov (1920-1992) was one of the most famous, honoured and widely read science fiction authors of all time. Born in Russia but raised in the USA, his career as an SF writer began in 1939 with 'Marooned Off Vesta', in AMAZING STORIES. His output was prolific by any standards - in a career spanning five decades, he wrote more than four hundred books, won six HUGOs, two NEBULAs and the SFWA GRAND MASTER AWARD, among many others, and provided pleasure and insight to millions of readers. He died in 1992 at the age of 72.