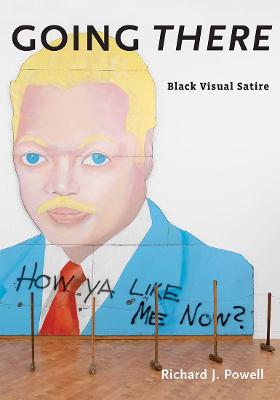 In this groundbreaking study, Richard J. Powell investigates the visual forms of satire produced by black artists in 20th- and 21st-century America. Underscoring the historical use of visual satire as antiracist dissent and introspective critique, Powell argues that it has a distinctly African American lineage. Taking on some of the most controversial works of the past century-in all their complexity, humor, and provocation-Powell raises important questions about the social power of art.

Expansive in both historical reach and breadth of media presented, Going There interweaves discussions of such works as the midcentury cartoons of Ollie Harrington, the installations of Kara Walker, the paintings of Robert Colescott, and the movies of Spike Lee. Other artists featured in the book include David Hammons, Arthur Jafa, Beverly McIver, Howardena Pindell, Betye Saar, and Carrie Mae Weems. Thoroughly researched and rich in context, Going There is essential reading in the history of satire, racial politics, and contemporary art.

» Have you read this book? We'd like to know what you think about it - write a review about Going There: Black Visual Satire book by Richard J. Powell and you'll earn 50c in Boomerang Bucks loyalty dollars (you must be a Boomerang Books Account Holder - it's free to sign up and there are great benefits!)


A Preview for this title is currently not available.
More Books By Richard J. Powell
View All