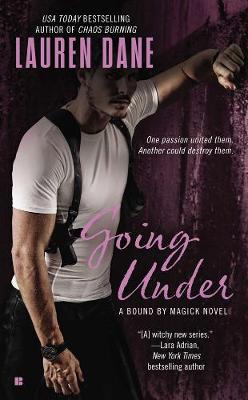 Description - Going Under by Lauren Dane

Now, together, with magick on their side, Molly and Gage are on the road in a desperate struggle to unite a torn world. From state houses to television news to legislative conference rooms across the country, they're fighting the good fight. And it's bringing out a passion in both of them they never expected-one as volatile, intense and all-consuming as their relentless battle for world unity. A battle that could be their undoing . . .

Praise for Heart of Darkness

'Lauren Dane always delivers a steamy, exciting rideand she does it again in her new novel of two lovers fighting for their lives against a rising threat, and a passion that's just as dangerous . . . ' Larissa Ione New York Times bestselling author

'The world . . . created here is big and bold.' Reading the Paranormal

'I was riveted.' Joyfully Reviewed

» Have you read this book? We'd like to know what you think about it - write a review about Going Under book by Lauren Dane and you'll earn 50c in Boomerang Bucks loyalty dollars (you must be a Boomerang Books Account Holder - it's free to sign up and there are great benefits!)

As a stay-at-home mom, Lauren Dane had lots of conversations in a singsong voice but no real outlet for adult thoughts and words. Armed with a secondhand laptop, she decided to "give that writing thing a serious go." Nearly a decade and several dozen books later, she's well aware of her good fortune and is loving every moment of it, even when she has to edit and put Barbie's dresses back on over and over again.

A Preview for this title is currently not available.
More Books By Lauren Dane
View All