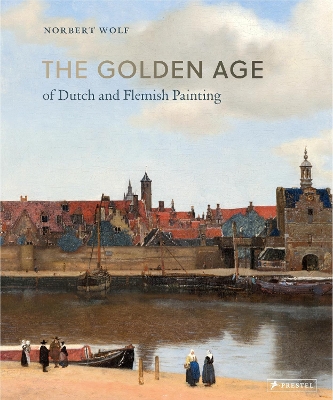 This beautifully illustrated, expansive overview of Dutch and Flemish art during the 17th century illuminates the creative achievements of one of the most important eras in western art. The Golden Age in Holland and Flanders roughly spanned the 17th century and was a period of enormous advances in the fields of commerce, science - and art. Still lifes, landscape paintings, and romantic depictions of everyday life became valued by the increasingly wealthy merchant classes in the Dutch provinces, while religious and historic paintings as well as portraits continued to appeal to the Flemish patronage. The Golden Age brought us Rembrandt, Vermeer, Rubens, and Van Dyck, but it was also the period of Frans Hals' revolutionary portraiture, Adriaen Brouwer's depictions of the working class at play, Jan Brueghel's velvety miniatures, and Hendrick Avercamp's lively winter landscapes. Norbert Wolf applies his vast understanding of the interplay between history, culture, and art to explore the forces that led to the Golden Age in Holland and Flanders and how this period influenced later generations of artists. Accompanied by luminous color illustrations, Wolf's accessible text considers the complex political, religious, social, and economic situation that led to newfound prosperity and, thus, to an enormous artistic output that we continue to marvel at and enjoy today. AUTHOR: Norbert Wolf is an art historian, lecturer, and author based in Munich, Germany. His books include Art Nouveau, Art Deco, and Impressionism (all by Prestel). SELLING POINTS: This volume looks at the Golden Age of Netherlandish painting, a fascinating and highly prolific period in European art history, roughly spanning the 17th century. The book also offers a survey of the historical events that led to the legal separation of the Protestant North and Catholic South in the Netherlands, and considers the complex political, religious, social, and economical situation in the Dutch and Flemish territories. Presents the works of the most important artists of the time, including the protagonists of Flemish Baroque painting such as Brueghel, Rubens, and van Dyck as well as Dutch masters like Rembrandt, Vermeer, and Frans Hals. In addition to analysing their revolutionary styles and artistic achievements, the author also examines the artists' mutual influences and their impact on 19th- and 20th-century art. Lavishly illustrated with some of the most important and intriguing paintings of the Dutch and Flemish Golden Age. 220 colour illustrations Hardcover with slipcase

» Have you read this book? We'd like to know what you think about it - write a review about Golden Age of Dutch and Flemish Painting book by Norbert Wolf and you'll earn 50c in Boomerang Bucks loyalty dollars (you must be a Boomerang Books Account Holder - it's free to sign up and there are great benefits!)