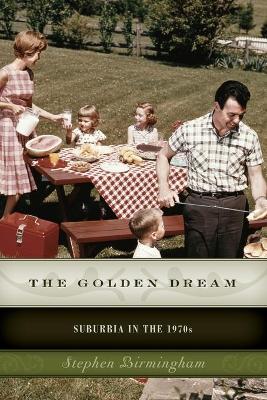 In this chatty, anecdotal, and often ironic inquiry, Stephen Birmingham investigates the nesting habits, enjoyments, and frustrations of American suburban life in the Seventies. He explores the social organism that is the American suburb-from Scottsdale Arizona, and Salt Lake City's suburbs, to New York's Westchester County and the suburbs surrounding the great industrial cities that fringe the Great Lakes. He has talked with householders great and small and gleaned their intensely personal views of the suburban experience: what they like, what they lament, what they fear. Much of what he records is agreeable gossip-as in his account of the relationship between the Pocantico Hills Rockefellers and the Greenwich Rockefellers; some is acute social criticism.

Almost without exception, the suburbanites came to the suburbs with a dream. The reality they found was often less than what they envisioned, but occasionally it was more. Most have had to strike a compromise between the dream and the reality, the swimming pool and manicured lawn and soaring property tax, good public schools and out-of-sight school taxes. This compromise in its various manifestations, and the related problems of status, add a depth of perspective to a book that oozes the fun and charm of the Seventies.

» Have you read this book? We'd like to know what you think about it - write a review about Golden Dream book by Stephen Birmingham and you'll earn 50c in Boomerang Bucks loyalty dollars (you must be a Boomerang Books Account Holder - it's free to sign up and there are great benefits!)