A True Story of Myth, Madness and Greed

'His story is about one man and one tree, but it is much more than that. John Vaillant has written a work that will change how many people think about nature.' Sebastian Junger, author of THE PERFECT STORM.

On a bleak winter night in 1997, a British Columbia timber scout named Grant Hadwin committed an act of shocking violence- he destroyed the legendary Golden Spruce of the Queen Charlotte Islands. With its rich colours, towering height and luminous needles, the tree was a scientific marvel, beloved by the local Haida people who believed it sacred.THE GOLDEN SPRUCE tells the story of the sadness which pushed Hadwin to such a desperate act of destruction - a bizarre environmental protest which acts as a metaphor for the challenge the world faces today. But it also raises the question of what then happened to Hadwin, who disappeared under suspicious circumstances and remains missing to this day.Part thrilling mystery, part haunting depiction of the ancient beauty of the coastal wilderness, and part dramatic chronicle of the historical collision of Europeans and the native Haida, THE GOLDEN SPRUCE is a timely portrait of man's troubled relationship with a vanishing world.

Other Editions - The Golden Spruce by John Vaillant 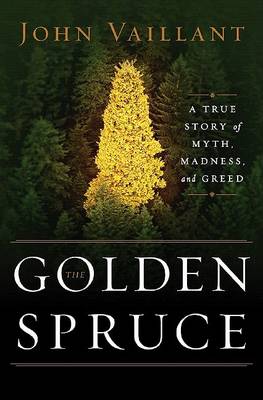 » Have you read this book? We'd like to know what you think about it - write a review about Golden Spruce book by John Vaillant and you'll earn 50c in Boomerang Bucks loyalty dollars (you must be a Boomerang Books Account Holder - it's free to sign up and there are great benefits!)

John Vaillant has written for The New Yorker, The Atlantic, Outside, National Geographic Adventure, and Men's Journal among others. He lives in Vancouver with his wife and children. Of particular interest to Vaillant are stories that explore collisions between human ambition and the natural world. His work in this and other fields has taken him to five continents and five oceans. The Golden Spruce is his first book.

The Moth and the Mountain: Shortlisted for the Costa Biography Award 2021
Ed Caesar
$18.39 $22.99
More Books By John Vaillant
View All