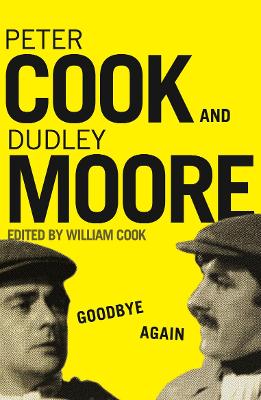 A unique collection of the finest work, including never before seen footage of comedy genius, and a fascinating insight into the relationship of Britain's greatest comic double act - Peter Cook and Dudley Moore. An illuminating and hilarious part-biography, part comic anthology of two of history's most famous comedians.

Peter Cook and Dudley Moore are the greatest double act that Great Britain has ever produced. This collection of their works is a comprehensive compilation of the finest comedy sketches that Cook and Moore ever wrote together - from the beginning of their partnership, in the groundbreaking stage show, Beyond The Fringe, to the notorious taboo busting Derek and Clive LPs that captured the spirit of punk rock, and inspired the scatological anarchy of Alternative Comedy. Featuring transcripts of one night stands long since almost forgotten, as well as a wealth of virtually unknown material, including previously unpublished scripts for Not Only But Also, Goodbye Again is a revelation, even for Cook and Moore's most informed fans.As well as illuminating their work, this book also promises to shed light on their intimate yet turbulent relationship. It will show how these two diametrically opposed men; tall and athletic Cook from a middle class public boarding school background, and diminutive, club-footed Moore, working class but with an impressive musical talent, came together to develop the closest of partnerships based on an instinctive, virtually intuitive sense of humour. Goodbye Again will chart the extraordinary friendship between the two men and its almost telepathic intensity, which not only bought them together but also pulled them apart time after time, until their eventual reconciliation.

» Have you read this book? We'd like to know what you think about it - write a review about Goodbye Again book by William Cook and you'll earn 50c in Boomerang Bucks loyalty dollars (you must be a Boomerang Books Account Holder - it's free to sign up and there are great benefits!)

William Cook is the author of Ha Bloody Ha - Comedians Talking (Fourth Estate) and The Comedy Store - The Club That Changed British Comedy (Little, Brown). He has worked for the BBC and written for the Guardian, the Mail on Sunday and New Statesman.

A Preview for this title is currently not available.
More Books By William Cook
View All

Furniture Repair & Restoration, The Practical Illustrated Guide to: Expert advice and step-by-step techniques in over 1200 photographs
$37.95 $39.95

The Capricious Lady: A Comedy, (Altered from Beaumont and Fletcher) as It Is Now Performing at the New Theatre-Royal, in Covent-Garden. Third Edition.
$37.43 $41.59

The Life of Samuel Johnson, LLD with Occasional Remarks on His Writings, an Authentic Copy of His Will, and a Catalogue of His Works to Which Are Added, Some Papers Written by Dr Johnson, in Behalf of a Late Unfortunate Character
$56.41 $62.68