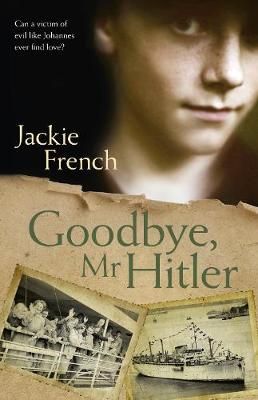 This is the story of Johannes, and Frau Timmins, and the strange girl now known as 'Helga'. It is also the story of how they survived the death camps, the vast wilderness faced by refugees in World War II, and eventually found happiness in Australia.

This moving and compelling book follows on the award-winning and bestselling Hitler's Daughter and Pennies for Hitler, and shows us that evil must be fought.

But once you've won, the hardest and most necessary battle is to understand and forgive. And to learn how to live and love again.

'Reading about [the holocaust] can be depressing, but not in this compelling, beautifully crafted, novel for young readers. Here author Jackie French looks at what the Holocaust can teach us about hope. How people in internment camps survived, what motivated them to live in a world where people could be so terrible to each other. -- Daily Telegraph

» Have you read this book? We'd like to know what you think about it - write a review about Goodbye, Mr Hitler book by Jackie French and you'll earn 50c in Boomerang Bucks loyalty dollars (you must be a Boomerang Books Account Holder - it's free to sign up and there are great benefits!)