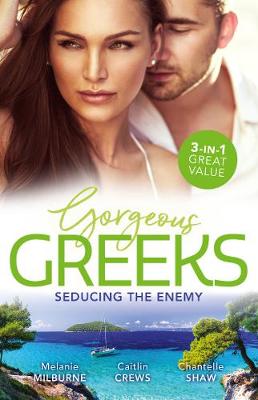 Gorgeous Greeks: Seducing The Enemy/Wedding Night with Her Enemy/Imprisoned by the Greek's Ring/The Greek's Acquisition

Description - Gorgeous Greeks: Seducing The Enemy/Wedding Night with Her Enemy/Imprisoned by the Greek's Ring/The Greek's Acquisition by Caitlin Crews

Blackmailed by the billionaire!

Allegra Kallas detests Draco Papandreou - and she especially can't stand the desire she feels whenever she sees the arrogant man who once rejected her! So she's horrified when her father's business runs into debt and the only man who can save them is none other than the ruthless Greek...

No matter how much Allegra protests, Draco knows the driven career-woman feels the fire which rages between them. And he's not above using his power to blackmail her into confessing it! To satisfy their cravings, Draco has a sinful plan: he'll make Allegra his wife, and seduce her into his bed...

His vengeance won't be complete...until he has her as his bride!

After ten years in prison for a crime he didn't commit, ruthless Greek Atlas Chariton is back to take revenge on Lexi Haring - the woman who put him there. He'll meet her at the altar and bind her to him - for life! But once married, the bliss of her sensual surrender threatens to unravel his hard-won vengeance...

When dealing with the devil...be prepared to play with fire!

It's taken years for the Dimitri Kalakos sized hole in Louise Frobisher's heart to heal. Yet now she has to face him once again - she needs the ruthless magnate's financial help...but absolutely nothing more!

Louise is offering the one thing Dimitri thought his money couldn't buy; the Greek island that should be his! She thinks she can strike a bargain, but Dimitri knows there can only be one winner - and failure just isn't in his vocabulary. He wants the island, and Louise back in his bed.

Book Reviews - Gorgeous Greeks: Seducing The Enemy/Wedding Night with Her Enemy/Imprisoned by the Greek's Ring/The Greek's Acquisition by Caitlin Crews

» Have you read this book? We'd like to know what you think about it - write a review about Gorgeous Greeks: Seducing The Enemy/Wedding Night with Her Enemy/Imprisoned by the Greek's Ring/The Greek's Acquisition book by Caitlin Crews and you'll earn 50c in Boomerang Bucks loyalty dollars (you must be a Boomerang Books Account Holder - it's free to sign up and there are great benefits!)


A Preview for this title is currently not available.
More Books By Caitlin Crews
View All