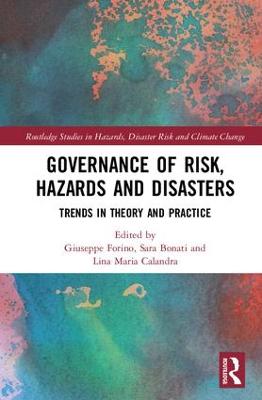 Governance of Risk, Hazards and Disasters

Trends in Theory and Practice

Description - Governance of Risk, Hazards and Disasters by Giuseppe Forino

Growing debates around governance are taking place among academic, policy-making, and practice-based communities. In light of the increasing focus on governance, this book presents and discusses governance as a framework that is able to both conceptualize and contextualize risks and disasters as currently experienced and managed into social systems.

Contributions offer a variety of perspectives, experiences and socio-cultural contexts which have identified the challenges, opportunities and critiques of promoting governance. Part I explores approaches, models, and keywords as applied to risk and disaster governance theory. Part II investigates practices of risk governance and associated issues by focusing on disaster risk reduction policy and practice. Finally, Part III explores practices of disaster governance and associated issues, by focusing on disaster recovery experiences. This book highlights cutting-edge recent theoretical and empirical trends and is a valuable resource for students, academics, practitioners and policy-makers interested in risk and disaster governance.

Other Editions - Governance of Risk, Hazards and Disasters by Giuseppe Forino » Have you read this book? We'd like to know what you think about it - write a review about Governance of Risk, Hazards and Disasters book by Giuseppe Forino and you'll earn 50c in Boomerang Bucks loyalty dollars (you must be a Boomerang Books Account Holder - it's free to sign up and there are great benefits!)

Giuseppe Forino holds a Ph.D in Economic Geography from Sapienza-University of Rome (Italy), where he analysed some community resilience experiences reconstructing the city of L'Aquila after the 2009 earthquake. He is currently doing a second Ph.D course in the School of Architecture and Built Environment, University of Newcastle (Australia), in which he is analysing the integration of climate change adaptation and disaster risk reduction in the Hunter Region, NSW, Australia. He is also research assistant in the same school. He worked on national and international research projects on land degradation in Southern Italy, rural development policies in Veneto region (Italy), environmental evaluation and climate change adaptation in European regions and urban areas. He has several published and in-revision articles in international peer-review academic journals. With L.M. Calandra and A. Porru, he edited the book Multiple Geographical Perspectives on Hazards and Disasters, published in 2014 by Valmar, Rome, Italy, His research interests include: disaster resilience, disaster management, post disaster reconstruction, climate change adaptation, socio-economic aspects of land degradation, rural development policies, Italy, Australia. Sara Bonati is associate researcher at the Center of Local and Regional Studies (CIERL - Centro de estudos locais e regionais), University of Madeira (Portugal). She holds a Ph.D. in Human and Physical Geography at the Veneto Doctoral School in Historical, Geographical and Anthropological studies, University of Padua (Italy). She has several published and in-press papers in international academic publications. She has coordinated the editorial board of the edited volume (Dis)memory of Disasters: An interdisciplinary approach, Funchal, Portugal (in press 2015). With G.M. Valent and M. Tononi, she is editing a book proposal for the Routledge series `Regions and Cities'. Her research interests include: disaster risk reduction, climate change adaptation, disaster resilience building, risk perception, human rights in disasters, disaster cultures, rural and urban studies. Lina Maria Calandra is Associate Professor in Geography at the Department of Human Studies, University of L'Aquila (Italy). She teaches Geography and Cartography and is the head of the cartographic laboratory `Cartolab'. Her fields of research are the geography of colonialism in Africa, as well as the problems of conservation with a focus on the relationships between environmental conflicts and local development in Africa and in the Apennines. Since the aftermath of the earthquake in L'Aquila on 6 April 2009, she has been analysing the social geography of vulnerability and resilience in the city, and mapping the social and territorial consequences of hazards and disasters. She has been editor of the journal Terra d'Africa. She has published several articles in national and international peer-review journals. She has published the books Atlante del turismo sostenibile in Africa (2007), Progetto geografia. Percorsi di riflessione e didattica (2007 and 2009), and as has edited the books Territorio e Democrazia. Un laboratorio di geografia sociale nel doposisma aquilano (2012) on social geography in post-disaster L'Aquila, and Multiple Geographical Perspectives on Hazards and Disasters (2014), with G. Forino and A. Porru.

A Preview for this title is currently not available.
More Books By Giuseppe Forino
View All