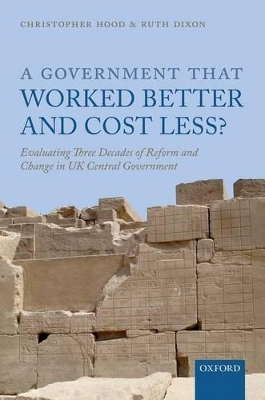 A Government that Worked Better and Cost Less?

Description - A Government that Worked Better and Cost Less? by Christopher Hood

The UK is said to have been one of the most prolific reformers of its public administration. Successive reforms have been accompanied by claims that the changes would make the world a better place by transforming the way government worked. Despite much discussion and debate over government makeovers and reforms, however, there has been remarkably little systematic evaluation of what happened to cost and performance in UK government during the last thirty years.
A Government that Worked Better and Cost Less? aims to address that gap, offering a unique evaluation of UK government modernization programmes from 1980 to the present day. The
book provides a distinctive framework for evaluating long-term performance in government, bringing together the 'working better' and 'costing less' dimensions, and presents detailed primary evidence within that framework.This book explores the implications of their findings for widely held ideas about public management, the questions they present, and their policy implications for a period in which pressures to make government 'work better and cost less' are unlikely to go
away.

Book Reviews - A Government that Worked Better and Cost Less? by Christopher Hood

» Have you read this book? We'd like to know what you think about it - write a review about Government that Worked Better and Cost Less? book by Christopher Hood and you'll earn 50c in Boomerang Bucks loyalty dollars (you must be a Boomerang Books Account Holder - it's free to sign up and there are great benefits!)

Christopher Hood, is a Fellow of All Souls College, Oxford, and was the Gladstone Professor of Government from 2001 to 2014, and Director of the ESRC Public Services research programme from 2004 to 2010. With Andrew Dunsire, he pioneered the development of 'bureaumetrics' from the late 1970s and was a leading commentator on the emergence of 'New Public Management' in the 1990s. Dr Ruth Dixon, who comes from a natural science background, has worked at the Department of Politics and International Relations, University of Oxford since 2006, playing a key role in the ESRC Public Services Research Programme before becoming a Research Fellow working on this project since 2010.

A Preview for this title is currently not available.
More Books By Christopher Hood
View All