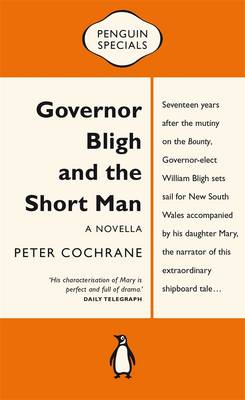 Seventeen years after the mutiny on the Bounty, Governor-elect William Bligh sets sail for New South Wales accompanied by his daughter Mary, the narrator of this extraordinary shipboard tale.
A cultured young Englishwoman, Mary is a complete novice at sea. She is entirely unprepared for life on the convoy that sets sail from Portsmouth in 1806- for the unfamiliar rituals, the great emptiness of the ocean, the terrifying storms, the bedazzling natural wonders. Most troubling of all is the bizarre quarrel between her father and the captain of the convoy, Joseph Short, a man whose sensitivities are almost a match for William Bligh's and whose temper brings the voyagers to the brink of catastrophe.

Mary's witty journal invites us beyond the quarterdeck rivalries into the private world of the Blighs- their family and friends, and the tragedies and failings of a living legend embarking on his last great command.

Peter Cochrane is an award-winning historian whose accolades include the inaugural Prime Minister's Prize for Australian History. In Governor Bligh and the Short Man he proves himself to be as adept a writer of fiction as he is of history.

'His characterisation of Mary is perfect and full of drama.' Troy Lennon, Daily Telegraph

' Cochrane preserves much of the restraint and decorum of the times, while allowing us to glimpse those aspects of life that people of that period, and to a lesser extent our own, did not talk about publicly ... Anyone interested in this formative period in Australian history will want to read this book .' Saturday Age

» Have you read this book? We'd like to know what you think about it - write a review about Governor Bligh & The Short Man: Penguin Special book by Peter Cochrane and you'll earn 50c in Boomerang Bucks loyalty dollars (you must be a Boomerang Books Account Holder - it's free to sign up and there are great benefits!)

Peter Cochrane is an historian and freelance writer living in Sydney. His previous books include Colonial Ambition- Foundations of Australian Democracy, winner of the inaugural Prime Minister's Prize for History, and Australians at War, the companion volume to the ABC TV series.