Travel back to a small Southern town where, before there was Duncan Motors, there were the Duncan brothers and their tough-as-nails women. After a hard fought battle, they?ve vanquished their rivals and taken their place as the leaders of Waycross, Georgia?s criminal enterprises. Their rise to the top is not without problems, though, as outside forces enter the scene and the Duncans are rocked by the murder of one of their own. No one knows who the killer is, but their secret adversary, only known as the Reaper of Georgia, won?t be happy until all the Duncans are completely wiped off the face of the earth. Luckily, the Duncan brothers aren?t alone, and when new and old friends are called in to help, an all-out war ensues. 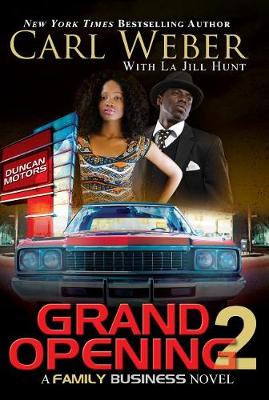 » Have you read this book? We'd like to know what you think about it - write a review about Grand Opening 2 book by Carl Weber and you'll earn 50c in Boomerang Bucks loyalty dollars (you must be a Boomerang Books Account Holder - it's free to sign up and there are great benefits!)

Carl Weber is the New York Times bestselling author of The Preacher's Son, So You Call Yourself a Man, Something on the Side, Up to No Good, Big Girls Do Cry, Torn Between Two Lovers, and She Ain't the One. He is the Publisher and Editorial Director of Urban Books and CEO of Urban Books Media, which is currently producing films based on several of his bestselling novels. He lives in Long Island, New York, with his family. His Web site is carlweber.net. Treasure Hernandez was incarcerated in a United States penitentiary. Upon her release, she moved to Atlanta with her daughter. She is working on future projects for Urban Books. Author Residence- Long Island, NY (Weber); Atlanta, GA (Hernandez)