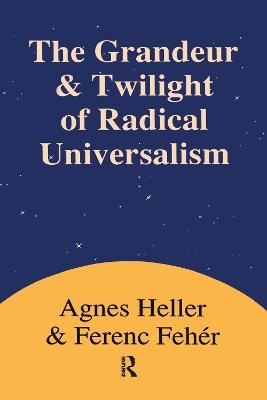 Grandeur and Twilight of Radical Universalism

Description - Grandeur and Twilight of Radical Universalism by Agnes Heller

Grandeur and Twilight of Radical Universalism provides a theoretical construction to the extraordinary events of the past several years in Europe and the Soviet Union, and China. These masterful essays attribute much of the problem of totalitarianism to its blind acceptance of a Marxist philosophy of practice. With the failure of communist practice, the collapse of the Marxian paradigm was quick to follow.At its roots this volume is a critique of the idea that we can have "scientific knowledge" of the social and political future. Totalitarian Marxism combined statements of history and claims of omniscience. Free choice was surrendered to history, and when the predicted outcomes fail to materialize, when communism came closer to being buried than capitalism, and western ideals of democracy proved far more compelling than inherited doctrines of authoritarianism, the outcome proved monumental and disastrous.The authors position themselves as evolving from critical Marxism to post-Marxism, and then post modernism. By this, they mean a modest view of life, one that moves beyond radical universalism and grand narrative, into a realization of individualism and equity concerns are central to the end of the twentieth century. The volume proceeds historically: from studies of the classic Marxian legacy; to the early twentieth century efforts of Lukacs, Weber and Adorno; proceeding to the disintegration of the Marxian paradigm in both its pure and revisionist forms. It ends with a study of options posed by this paradigmatic collapse - to consideration of the status of postmodernity and the choices between pure relativism and a theological fundamentalism. ,This is a work of absolute importance for political philosophy, the sociology of knowledge, and the history of ideas. In raising recent events to a theoretically meaningful framework, it represents a refreshing as well as remarkable step toward understanding Revolutions from 1789 to 1989.

» Have you read this book? We'd like to know what you think about it - write a review about Grandeur and Twilight of Radical Universalism book by Agnes Heller and you'll earn 50c in Boomerang Bucks loyalty dollars (you must be a Boomerang Books Account Holder - it's free to sign up and there are great benefits!)


A Preview for this title is currently not available.
More Books By Agnes Heller
View All