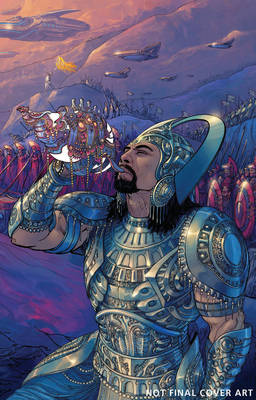 From superstar creator Grant Morrison (All-Star Superman, Batman
& Robin, The Invisibles), comes 18 Days, the story of
three generations of super-warriors, meeting for the final battle of their age.
18 Days is a re-imagining of the great eastern myth, Mahabharata, and
follows the course of the climactic war that concludes the age of the gods and
begins the age of man. It is the prototype for every war ever fought. The scale
is epic, wherein the biggest armies ever conceived face one another across the
ultimate battlefield to decide the fate of the future.
This hardcover illustrated script book from Dynamite Entertainment and
Liquid Comics offers readers a first glimpse into the mythic animated series
being developed by Morrison. The book reveals the inner workings of the
acclaimed writer's process and features the original animation scripts, story
bibles, character descriptions, and commentaries. Grant's groundbreaking story
is matched perfectly with original illustrations created by acclaimed artist,
Mukesh Singh (Devi, Gamekeeper, Shadow Hunter).

» Have you read this book? We'd like to know what you think about it - write a review about Grant Morrison's 18 Days book by Grant Morrison and you'll earn 50c in Boomerang Bucks loyalty dollars (you must be a Boomerang Books Account Holder - it's free to sign up and there are great benefits!)