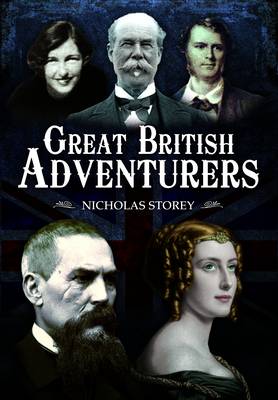 In selecting my adventurers, I have had to find limits. The first has been to confine my selection to men and women who are (at least loosely) British and, even then, service and adoption have sometimes, as with Krystyna Skarbeka, taken the place of birth, and I have chosen to ignore such things as competing national claims for Tenzing Norgay. The second limit that I have set myself is generally to exclude heroic adventurers in battle, simply because there is (rightly), so much already written about them, but I have found place for certain (representative) secret agents of the Second World War, whose acts (in voluntary service, beyond the call of simple duty), surely took them out of the arena of straight-forward battle and into the realm of the most individual and courageous adventure. The result of these decisions remains to be judged but the overall objective has been to renew interest in the lives of some of our real heroes and heroines, as representative of the many others that there are; in an age in which contemporary sporting and pop art 'heroes' dominate the news and provide the only readily evident 'inspiration', and also an age in which addiction to the computer screen nearly robs the young of memories and dreams of high adventure; of which ripping yarns are born. The third limit is a limit of time: this speaks for itself; otherwise how would Drake and Raleigh, Clive of India, General Woolf and Captain Cook not have found their places? There have to be such limits. The final limit has been to exclude those who are widely famed already: what more is there to say of General Gordon or Dr David Livingstone of Captain Robert Falcon Scott and Captain Laurence Oates; even though what has been said should often be repeated? Moreover, although Sir Edmund Hillary is acknowledged as the first conqueror of Mount Everest; Tenzing Norgay was there with him and what of George Mallory who, some time before had died, either going up or coming down? SELLING POINTS: Covers some of the lesser known great British Adventurers Features fascinating account of a WWII Special Operations Executive Agent ILLUSTRATIONS: 8 pages plates

» Have you read this book? We'd like to know what you think about it - write a review about Great British Adventurers book by Nicholas Storey and you'll earn 50c in Boomerang Bucks loyalty dollars (you must be a Boomerang Books Account Holder - it's free to sign up and there are great benefits!)


A Preview for this title is currently not available.
More Books By Nicholas Storey
View All