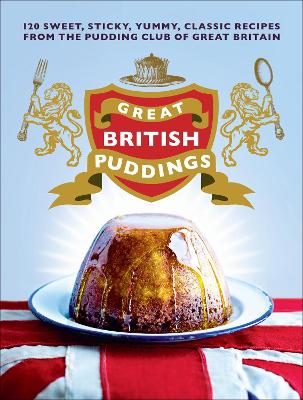 The ultimate pudding cookbook with 150 recipes for the Best of British puddings, from the world-famous Pudding Club of Great Britain

Please be upstanding, ladies and gentlemen, for the greatest puddings that this fair land has to offer!

Celebrating the gooiest, yummiest, sweetest treats that made Britain great, this new cookbook lets you in on the secrets of the best desserts in the country. From steamed sponges (chestnut and chocolate pudding) to classic crumbles (apple, blackberry and cinnamon), forgotten creations such as Lord Randall's pudding and school dinner favourites like jam roly poly, through chocoholic delights to perfect rice pudding and vintage Christmas pudding, this book is a genuine pud-lover's delight.

With 150 foolproof, tried-and-tested dessert recipes, plus easy instructions and colour photographs, this is the essential pudding cookbook from the real experts.

» Have you read this book? We'd like to know what you think about it - write a review about Great British Puddings book by Jill and Simon Coombe (formerly The Pudding Club) and you'll earn 50c in Boomerang Bucks loyalty dollars (you must be a Boomerang Books Account Holder - it's free to sign up and there are great benefits!)

The Pudding Club was founded at the Three Ways House Hotel in 1985 to prevent the demise of the great British Pudding, at a time when restaurants seemed to offer only tiny portions of frozen cheesecake and tasteless gateaux. Today the Pudding Club and its supporters can claim that their efforts have re-established such delights as jam roly poly, syrup sponge, spotted dick and bread and butter pudding as favourites throughout the country - and beyond.