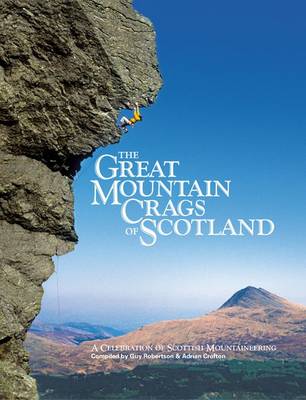 The Great Mountain Crags of Scotland

A Celebration of Scottish Mountaineering

Description - The Great Mountain Crags of Scotland by Guy Robertson

The Great Mountain Crags of Scotland is a celebration of climbing in Scotland's wild places, compiled by Guy Robertson and Adrian Crofton. Featuring contributions from many of Scottish mountaineering's great writers and climbers, and beautifully illustrated with breathtaking photography, it delves deep into the heart of some of the oldest mountains on Earth. This is a book for anyone with an interest in Scotland's wild places, where the mountains and cliffs, rather than the climbs, take centre stage, transporting the reader far from towns and cities, and deep into the wilderness. The crags are the tallest, steepest and most majestic anywhere in the British Isles. They are all situated in a high mountain environment, and always a good hike from the nearest road. A visit to any of these great crags is therefore a worthy end in itself. For those wishing to venture onto the crags, all the climbs described are highly adventurous, relying solely upon leader-placed protection. Many of the crags and climbs are described and illustrated here in detail for the very first time.
Among these pages are accounts of some of Scottish mountaineering's greatest triumphs, but also accounts of necessary failures - chasing elusive conditions, knowing when to go down, when to return. The authors relate their personal experiences of these cliffs and the climbing, and contained here are real treasures: schoolboy Dave MacLeod soloing on The Cobbler in winter after catching the train from Dumbarton, Mark McGowan's gripping first-hand account of soloing Shibboleth on Slime Wall of Buachaille Etive Mor, Grant Farquhar's recollections of a cherished first ascent on the Great Prow of Skye's Bla Bheinn, Es Tresidder falling under the spell of Creag Meagaidh's Pinnacle Face, and Brian Davison's 15-year waiting game for the first winter ascent of Mort on the Tough-Brown Face of Lochnagar. Split into four sections - The South West Highlands, The North West Highlands, The Islands and The Cairngorms & Central Highlands - this book features unique contributions from, amongst others, Nick Bullock, Rick Campbell, Jason Currie, Brian Davison, Kevin Howett, Julian Lines, Martin Moran, Andy Nisbet, Simon Richardson and Tony Stone.
Each section is accompanied by an original poem by Stuart Campbell, and renowned author and mountaineer Andy Cave has contributed the foreword.

» Have you read this book? We'd like to know what you think about it - write a review about Great Mountain Crags of Scotland book by Guy Robertson and you'll earn 50c in Boomerang Bucks loyalty dollars (you must be a Boomerang Books Account Holder - it's free to sign up and there are great benefits!)

Guy Robertson was introduced to the Scottish mountains as a young boy through family hill walks and numerous fishing holidays in the North West Highlands. He began roped climbing at the age of 19 with a series of highly chaotic, uninformed and highly memorable forays into the Cairngorms in winter. Other formative experiences were based around local adventures with the many colourful characters that frequented the Kings House Hotel in Glencoe where he worked as a student in the late 1980s. He has since climbed extensively across the UK and further afield, with first ascents in regions as diverse as Morocco, Jordan, the Alps, Norway, Peru and Kyrgyzstan, but his first love is exploratory winter climbing in Scotland. He also has an enduring passion for writing and storytelling in mountaineering, with a number of essays published previously in the Scottish Mountaineering Club Journal, the American Alpine Journal, and UK-based climbing magazines. It is his hope that in some small way this book will inspire future generations of climbers to explore and appreciate the Scottish mountain crags as a rare and precious frontier for modern traditional climbing. Guy works as an environmental consultant and lives in Aberdeen with his partner Susan and their two children, Finn and Jess. Adrian Crofton knew that climbing had to be the sport for him when he was told that 'climbing instructors' were excused attendance at his school's Army Cadet Corps. Soon enough he learnt the basics at the climbing wall and not long after he discovered a dusty copy of Hard Rock in the library and his curiosity was truly piqued. In spite of a physique better suited to a middleweight boxer or navvy he has since managed a few respectable climbs and has enjoyed over 25 years exploring the Highlands and Islands, putting up the occasional first ascent in the process. Drawn to the wilder and often more obscure parts of the Highlands, valuing solitude, adventure and communion with nature above all else, he nonetheless loves the culture and traditions of Scottish mountaineering and is far from averse to a good bothy party. Although he has climbed extensively elsewhere in the UK and Europe, he is still happiest roaming in the hills in his own backyard - on foot, or ski, or bike, or even swimming in the high lochains and kayaking in the rivers. Increasingly concerned to try to help conserve Scotland's wild lands, he is a member of the North East Mountain Trust and Scottish Wildlife Trust. Recognising that many children have no idea of the wealth of adventure that lies on their doorstep, he sits on the advisory board of the local extreme sports charity, Transition Extreme. Adrian works as a general practitioner and paediatrician in Aberdeen, where he lives with his wife Rachelle and their two children, Eilidh and Alasdair.

A Preview for this title is currently not available.
More Books By Guy Robertson
View All