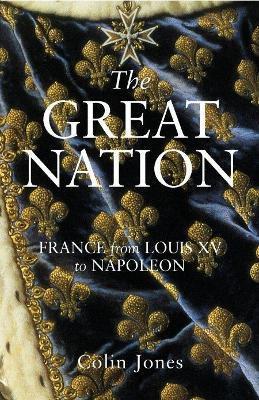 The Great Nation: France from Louis XV to Napoleon

The New Penguin History of France

Description - The Great Nation: France from Louis XV to Napoleon by Colin Jones

There can be few more mesmerising historical narratives than the story of how the dazzlingly confident and secure monarchy Louis XIV, 'the Sun King', left to his successors in 1715 became the discredited, debt-ridden failure toppled by Revolution in1789. The further story of the bloody unravelling of the Revolution until its seizure by Napoleon is equally astounding.

Colin Jones' brilliant new book is the first in 40 years to describe the whole period. Jones' key point in this gripping narrative is that France was NOT doomed to Revolution and that the 'ancien regime' DID remain dynamic and innovatory, twisting and turning until finally stoven in by the intolerable costs and humiliation of its wars with Britain.

» Have you read this book? We'd like to know what you think about it - write a review about Great Nation: France from Louis XV to Napoleon book by Colin Jones and you'll earn 50c in Boomerang Bucks loyalty dollars (you must be a Boomerang Books Account Holder - it's free to sign up and there are great benefits!)

Colin Jones is Professor of History at the University of Warwick and is now writing PARIS: A HISTORY for Allen Lane.

A Preview for this title is currently not available.
More Books By Colin Jones
View All