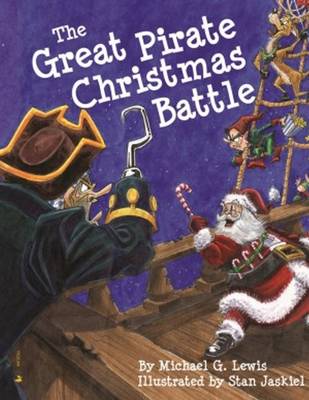 "Yo ho-ho-ho! Michael Lewis's sea-faring Santa tale is surely the best buried treasure you'll ever uncover! The Great Pirate Christmas Battle is so funny you'll shiver your timbers with laughter and clap your hands! Unless you have a hook for a hand. Then you probably shouldn't do that."-Butch Hartman, voice actor for Family Guy, writer for Dexter's Laboratory and The Powerpuff Girls, and creator of The Fairly OddParentsTake to the high seas with this mordantly witty tale of tinsel and terror. Cap'n McNasty and his rapscallions gleefully plunder children's presents-until Santa Claus and his feisty elves swoop in to put an end to their naughty ways!

» Have you read this book? We'd like to know what you think about it - write a review about Great Pirate Christmas Battle, The book by Michael Lewis and you'll earn 50c in Boomerang Bucks loyalty dollars (you must be a Boomerang Books Account Holder - it's free to sign up and there are great benefits!)

Michael G. Lewis is a former playwright whose works were favorably reviewed by such publications as the Los Angeles Times and LA Weekly. He worked in the entertainment industry for ten years and had guest roles in several shows, including Growing Pains, Beauty and the Beast, and Clueless. Lewis attended Bishops University and graduated from the University of Massachusetts Amherst with a BA in English and minor in drama. He lives with his wife and four sons in Weymouth, Massachusetts. Stan Jaskiel is a professional cartoonist who has illustrated more than twenty childrens books as well as numerous coloring books, t-shirts, and magazines. He attended the Massachusetts College of Art. A former industrial designer, Jaskiel has freelanced full-time since 1992. He lives with his wife in Salem, Massachusetts, where he spends his time sketching and worrying about the Red Sox.

A Preview for this title is currently not available.
More Books By Michael Lewis
View All