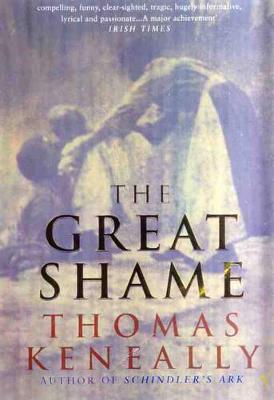 The eagerly-awaited paperback of an incredible work of history, social injustice and survival.

'...a grandly conceived and prodigiously researched homage to his Irish forebears' The Age

'... the range and coverage of this material is impressive ... his zest is infectious' Sydney Morning Herald

In the nineteenth century, the Irish population was halved. The Great Shame is Thomas Keneally's astonishing work of non-fiction which traces the three causes of this depletion- the famine, the emigrations, and the transportations to Australia.

Based on unique research among little-used sources, this masterly book traces eighty years of Irish history, told through the intimate lens of political prisoners - some of them Keneally's ancestors who served time as convicts in Australia.

Beginning with Hugh Larkin, a twenty-four-year-old 'Ribbonman' transported for life in 1834, The Great Shame tells of the Ireland these prisoners came from and the Australia they encountered. It brings us close to Irish women such as Esther, wife of Larkin, and the future Lady Wilde, mother of Oscar, friend and collaborator of notable Irish prisoners. But we also encounter the 'Female Factory' and the Irish convict women who married humble Protestant criminals, and we learn of the often desperate survival methods of 'transportation-widowed' women left in Ireland.

Throughout the nineteenth century, Australian and American organisations participated in the extraordinary escapes or attempted escapes from Australia of some of the world-famous Irish politicals. Among these was William Smith O'Brien, nobleman, leader of an uprising at the height of the Irish Famine, who became, from solitary confinement in Van Dieman's Land, the Mandela of his age. Thomas Francis Meagher's spectacular escape led to a glittering American career as orator, Union general, and tragic Governor of Montana. John Mitchel, Meagher's friend in Van Dieman exile, became a Confederate newspaper man, gave two of his sons to the Confederate cause, was imprisoned with Jefferson Davis, but emerged to reinfiltrate Ireland and become member for Tipperary.

Through many such lives, famous and obscure, we see not only the daily experience of famine sufferers and Irish activists, but also the astonishing history of the Irish diaspora- to Saint Lawrence, to New York, to the high plains of Montana and the bush towns of New South Wales. All of them are vividly present in this extraordinary tale of Australian imprisonment, Irish disaster and New World redemption.

Other Editions - The Great Shame by Tom Keneally » Have you read this book? We'd like to know what you think about it - write a review about Great Shame book by Tom Keneally and you'll earn 50c in Boomerang Bucks loyalty dollars (you must be a Boomerang Books Account Holder - it's free to sign up and there are great benefits!)

THOMAS KENEALLY won the Booker Prize in 1982 with SCHINDLER S ARK, later made into the Academy Award-winning film SCHINDLER S LIST by Steven Spielberg. He has written eleven works of non-fiction, including THREE FAMINES and his recent memoir SEARCHING FOR SCHINDLER, and the histories THE COMMONWEALTH OF THIEVES, THE GREAT SHAME and AMERICAN SCOUNDREL, and 29 works of fiction, including THE PEOPLE S TRAIN, THE WIDOW AND HER HERO (both shortlisted for the Prime Minister s Literary Award), AN ANGEL IN AUSTRALIA and BETTANY'S BOOK. His novels THE CHANT OF JIMMY BLACKSMITH, GOSSIP FROM THE FOREST, and CONFEDERATES were all shortlisted for the Booker Prize, while BRING LARKS AND HEROES and THREE CHEERS FOR THE PARACLETE won the Miles Franklin Award. His most recent novel THE PEOPLE S TRAIN was longlisted for the Miles Franklin Award and shortlisted for the Commonwealth Writers Prize, South East Asia division.