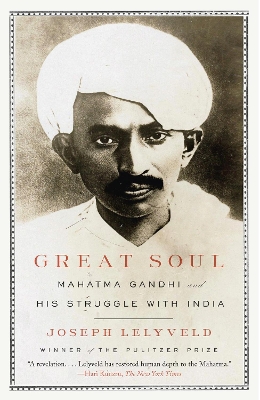 Mahatma Gandhi and His Struggle with India

A highly original, stirring book on Mahatma Gandhi that deepens our sense of his achievements and disappointments-his success in seizing India's imagination and shaping its independence struggle as a mass movement, his recognition late in life that few of his followers paid more than lip service to his ambitious goals of social justice for the country's minorities, outcasts, and rural poor.

Pulitzer Prize-winner Joseph Lelyveld shows in vivid, unmatched detail how Gandhi's sense of mission, social values, and philosophy of nonviolent resistance were shaped on another subcontinent-during two decades in South Africa-and then tested by an India that quickly learned to revere him as a Mahatma, or "Great Soul," while following him only a small part of the way to the social transformation he envisioned. The man himself emerges as one of history's most remarkable self-creations, a prosperous lawyer who became an ascetic in a loincloth wholly dedicated to political and social action. Lelyveld leads us step-by-step through the heroic-and tragic-last months of this selfless leader's long campaign when his nonviolent efforts culminated in the partition of India, the creation of Pakistan, and a bloodbath of ethnic cleansing that ended only with his own assassination.

India and its politicians were ready to place Gandhi on a pedestal as "Father of the Nation" but were less inclined to embrace his teachings. Muslim support, crucial in his rise to leadership, soon waned, and the oppressed untouchables-for whom Gandhi spoke to Hindus as a whole-produced their own leaders.

Here is a vital, brilliant reconsideration of Gandhi's extraordinary struggles on two continents, of his fierce but, finally, unfulfilled hopes, and of his ever-evolving legacy, which more than six decades after his death still ensures his place as India's social conscience-and not just India's. Excerpt1

It was a brief only a briefless lawyer might have accepted. Mohandas Gandhi landed in South Africa as an untested, unknown twenty-three- year-old law clerk brought over from Bombay, where his effort to launch a legal career had been stalled for more than a year. His stay in the country was expected to be temporary, a year at most. Instead, a full twenty-one years elapsed before he made his final departure on July 14, 1914. By then, he was forty-four, a seasoned politician and negotiator, recently leader of a mass movement, author of a doctrine for such struggles, a pithy and prolific political pamphleteer, and more-a self-taught evangelist on matters spiritual, nutritional, even medical. That's to say, he was well on his way to becoming the Gandhi India would come to revere and, sporadically, follow.

None of that was part of the original job description. His only mission at the outset was to assist in a bitter civil suit between two Muslim trading firms with roots of their own in Porbandar, the small port on the Arabian Sea, in the northwest corner of today's India, where he was born. All the young lawyer brought to the case were his fluency in English and Gujarati, his first language, and his recent legal training at the Inner Temple in London; his lowly task was to function as an interpreter, culturally as well as linguistically, between the merchant who engaged him and the merchant's English attorney.

Up to this point there was no evidence of his ever having had a spontaneous political thought. During three years in London-and the nearly two years of trying to find his feet in India that followed-his causes were dietary and religious- vegetarianism and the mystical cult known as Theosophy, which claimed to have absorbed the wisdom of the East, in particular of Hinduism, about which Gandhi, looking for footholds on a foreign shore, had more curiosity then than scriptural knowledge himself. Never a mystic, he found fellowship in London with other seekers on what amounted, metaphorically speaking, to a small weedy fringe, which he took to be common ground between two cultures.

South Africa, by contrast, challenged him from the start to explain what he thought he was doing there in his brown skin. Or, more precisely, in his brown skin, natty frock coat, striped pants, and black turban, flattened in the style of his native Kathiawad region, which he wore into a magistrate's court in Durban on May 23, 1893, the day after his arrival. The magistrate took the headgear as a sign of disrespect and ordered the unknown lawyer to remove it; instead, Gandhi stalked out of the courtroom. The small confrontation was written up the next day in The Natal Advertiser in a sardonic little article titled "An Unwelcome Visitor." Gandhi immediately shot off a letter to the newspaper, the first of dozens he'd write to deflect or deflate white sentiments. "Just as it is a mark of respect amongst Europeans to take off their hats," he wrote, an Indian shows respect by keeping his head covered. "In England, on attending drawing-room meetings and evening parties, Indians always keep the head-dress, and the English ladies and gentlemen seem to appreciate the regard which we show thereby."

The letter saw print on what was only the fourth day the young nonentity had been in the land. It's noteworthy because it comes nearly two weeks before a jarring experience of racial insult, on a train heading inland from the coast, that's generally held to have fired his spirit of resistance. The letter to the Advertiser would seem to demonstrate that Gandhi's spirit didn't need igniting; its undertone of teasing, of playful jousting, would turn out to be characteristic. Yet it's the train incident that's certified as transformative not only in Richard Attenborough's film Gandhi or Philip Glass's opera Satyagraha but in Gandhi's own Autobiography, written three decades after the event.

If it wasn't character forming, it must have been character arousing (or deepening) to be ejected, as Gandhi was at Pietermaritzburg, from a first-class compartment because a white passenger objected to having to share the space with a "coolie." What's regularly underplayed in the countless renditions of the train incident is the fact that the agitated young lawyer eventually got his way. The next morning he fired off telegrams to the general manager of the railway and his sponsor in Durban. He raised enough of a commotion that he finally was allowed to reboard the same train from the same station the next night under the protection of the stationmaster, occupying a first-class berth.

The rail line didn't run all the way to Johannesburg in those days, so he had to complete the final leg of the trip by stagecoach. Again he fell into a clash that was overtly racial. Gandhi, who'd refrained from making a fuss about being seated outside on the coach box next to the driver, was dragged down at a rest stop by a white crewman who wanted the seat for himself. When he resisted, the crewman called him a "sammy"-a derisive South African epithet for Indians (derived from "swami," it's said)-and started thumping him. In Gandhi's retelling, his protests had the surprising effect of rousing sympathetic white passengers to intervene on his behalf. He manages to keep his seat and, when the coach stops for the night, shoots off a letter to the local supervisor of the stagecoach company, who then makes sure that the young foreigner is seated inside for the final stage of the journey.

All the newcomer's almost instantaneous retorts in letters and telegrams tell us that young Mohan, as he would have been called, brought his instinct for resistance (what the psychoanalyst Erik Erikson called his "eternal negative") with him to South Africa. Its alien environment would prove a perfect place for that instinct to flourish. In what was still largely a frontier society, t » Have you read this book? We'd like to know what you think about it - write a review about Great Soul book by Joseph Lelyveld and you'll earn 50c in Boomerang Bucks loyalty dollars (you must be a Boomerang Books Account Holder - it's free to sign up and there are great benefits!)


A Preview for this title is currently not available.
More Books By Joseph Lelyveld
View All