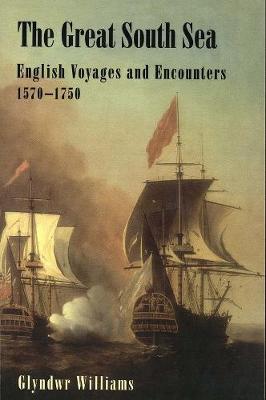 From the sixteenth to the eighteenth centuries, English buccaneers, privateers, and naval expeditions sought fame and fortune in the distant reaches of the South Sea. Beginning with the voyage of Francis Drake in the 1570s and continuing through that of George Anson in the 1740s, a series of predatory English adventurers pursued Spanish treasure, and for a few the dream of riches came true. For most, the voyages ended in disappointment, and sometimes death. This engrossing book investigates these maritime adventures and how they were described in popular accounts of the time?accounts that affected English consciousness and perceptions of the wider world and that influenced the planning and nature of the later great voyages of James Cook and others.

Glyndwr Williams, a leading expert on the exploration of the Pacific Ocean, draws on printed accounts of South Sea voyages as well as unpublished records?buccaneer journals, expedition papers, and government documents from public and private archives. For English seamen preying on Spanish trade and treasure, the South Sea was limited to the waters lapping the shores of Chile, Peru, and Mexico. But the vision was wider for others, Williams reveals. Cartographers at home in England, untrammeled by the constraints and dangers of actual voyaging, produced speculative maps with a vast Terra Australis Incognita, with fabulous Islands of Solomon, and with a promised short passage from Atlantic to Pacific. Satirical and utopian writers from Joseph Hall to Jonathan Swift found ample space in the wide ocean for their fictional travelers. And contemporary published voyage accounts?marvelous, though not necessarily reliable?further blurred the line between real and imaginary, contributing to the alluring, exotic image of the South Sea that took root in English folk memory and long outlasted the age of the buccaneers.

» Have you read this book? We'd like to know what you think about it - write a review about Great South Sea book by Glyn Williams and you'll earn 50c in Boomerang Bucks loyalty dollars (you must be a Boomerang Books Account Holder - it's free to sign up and there are great benefits!)


A Preview for this title is currently not available.
More Books By Glyn Williams
View All