Greece in the Making 1200--479 BC is an accessible and comprehensive account of Greek history from the end of the Bronze Age to the Classical Period. The first edition of this book broke new ground by acknowledging that, barring a small number of archaic poems and inscriptions, the majority of our literary evidence for archaic Greece reported only what later writers wanted to tell, and so was subject to systematic selection and distortion. This book offers a narrative which acknowledges the later traditions, as traditions, but insists that we must primarily confront the contemporary evidence, which is in large part archaeological and art historical, and must make sense of it in its own terms. In this second edition, as well as updating the text to take account of recent scholarship and re-ordering, Robin Osborne has addressed more explicitly the weaknesses and unsustainable interpretations which the first edition chose merely to pass over. He now spells out why this book features no 'rise of the polis' and no 'colonization', and why the treatment of Greek settlement abroad is necessarily spread over various chapters.
Students and teachers alike will particularly appreciate the enhanced discussion of economic history and the more systematic treatment of issues of gender and sexuality.

Buy Greece in the Making 1200-479 BC by Robin Osborne from Australia's Online Independent Bookstore, Boomerang Books. 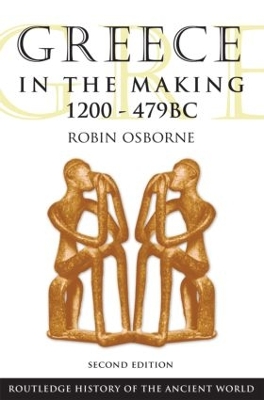 » Have you read this book? We'd like to know what you think about it - write a review about Greece in the Making 1200-479 BC book by Robin Osborne and you'll earn 50c in Boomerang Bucks loyalty dollars (you must be a Boomerang Books Account Holder - it's free to sign up and there are great benefits!)