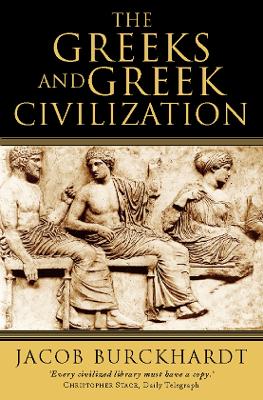 The Greeks and Greek Civilization

Description - The Greeks and Greek Civilization by Jacob Burckhardt

For the first time in English, one of the greatest masterpieces of historical writing: 'Every civilized library must have a copy.' CHRISTOPHER STACE, Telegraph

'A wonderfully fat and vivid reminder of the splendour and miseries of Hellenism...enlightened and enlightening, a joy to read, delicious with anecdotes and a manifest labour of love, candour and openmindedness.' FREDERIC RAPHAEL, Sunday Times

Jacob Burckhardt (1818-97) was one of the greatest historians of classical and Renaissance art, architecture and culture. Though he died over a hundred years ago, his superb prose is as fresh and readable today as it was at the end of the nineteenth century. The Greeks and Greek Civilization describes, in glorious, elegant detail, the lives of the ancient Greeks and the origins of their culture.The book has never appeared before in English. Oswyn Murray, the book's editor, and his translator, Sheila Stern, have been labouring for many years on the text and now, finally, have ready an authoritative version which, in Oswyn Murray's words, 'remains the best account of Greek civilization.'

'His changes in tone, the sudden plunge from the grandest to the most minor themes, the zooming in and out from the broadest panoramas to a particular carpet on a particular floor, the massiveness of his project and the lightness with which he accomplishes it, not to mention his vast knowledge, his clear style, his precision and his general surefootedness, are what makes Burckhardt great in a way that is not so different from the way Shakespeare is great or Rembrandt or Beethoven. He created vast spaces in history, heights and depths, enormous ranges of pitch and timbre, sunny clearings in the midst of impenetrable gloom...Thanks to the efforts of Oswyn Murray and Sheila Stern, a Great Blue Whale is swimming for the first time in English waters. Tiddlers everywhere should be pleased to accept the invitation to swim in its posthumous wake.' JAMES DAVIDSON, London Review of Books

Other Editions - The Greeks and Greek Civilization by Jacob Burckhardt 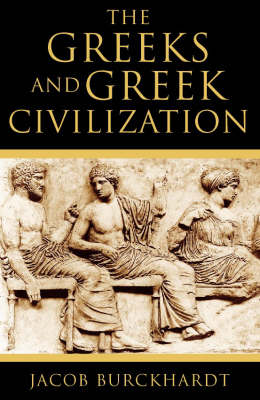 Book Reviews - The Greeks and Greek Civilization by Jacob Burckhardt

» Have you read this book? We'd like to know what you think about it - write a review about Greeks and Greek Civilization book by Jacob Burckhardt and you'll earn 50c in Boomerang Bucks loyalty dollars (you must be a Boomerang Books Account Holder - it's free to sign up and there are great benefits!)

Jacob Burckhardt was one of the greatest historians of the nineteenth century. He is best-known for his monumental Civilization of the Renaissance in Italy, two editions of which are currently in print (Penguin 1990 and Phaidon 1995).Oswyn Murray is a Fellow and Tutor in Ancient History at Balliol College, Oxford and the editor of the Fontana History of the Ancient World series.Sheila Stern is a translator and critic. She was married to J. P. Stern, author of Hitler: The Fuhrer and the People.

A Preview for this title is currently not available.
More Books By Jacob Burckhardt
View All