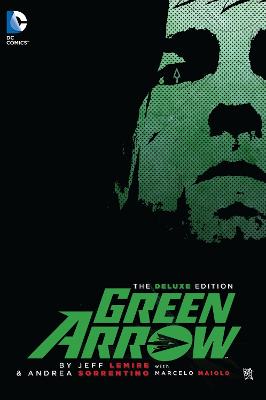 Oliver Queen thought he had it all figured out. As the heroic archer Green Arrow, he'd finally found a sense of purpose, friends to aid him, even a place on the Justice League of America. But now, he's not even sure where he came from... or who he came from.

As Green Arrow discovers that his stranding on a desert island was more than just an accident, there seem to be more sinister forces at work behind all these sudden revelations. The Queen family is embroiled in a war generations old. A war of clans. A war of outsiders.

» Have you read this book? We'd like to know what you think about it - write a review about Green Arrow By Jeff Lemire Deluxe Edition HC book by Jeff Lemire and you'll earn 50c in Boomerang Bucks loyalty dollars (you must be a Boomerang Books Account Holder - it's free to sign up and there are great benefits!)

A Preview for this title is currently not available.
More Books By Jeff Lemire
View All

Doctor Andromeda And The Kingdom Of Lost Tomorrows: From The World Of Black Hammer
$26.39 $32.99