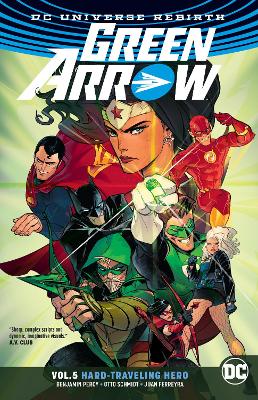 Benjamin Percy's critically acclaimed run on the Emerald Archer has all lead to this in GREEN ARROW VOL. 5!

They killed Oliver Queen. They made an outlaw of Green Arrow. Now the Ninth Circle will gather its forces to destroy the hero's very soul. Buildings will topple. Innocents will starve. Disease will spread. And Seattle will die. The biggest Green Arrow story ever is here!

» Have you read this book? We'd like to know what you think about it - write a review about Green Arrow Vol. 5 Hard Travelin' Hero book by Benjamin Percy and you'll earn 50c in Boomerang Bucks loyalty dollars (you must be a Boomerang Books Account Holder - it's free to sign up and there are great benefits!)

Benjamin Percy is the award-winning author of the new novel The Dead Lands, as well as Red Moon, The Wilding and the short-story collections Refresh, Refresh and The Language of Elk. A native of the high desert of Central Oregon, Percy also writes nonfiction, which has appeared in Esquire, GQ, Time and more. He is the winner of the Pushcart Prize, a Whiting Award and the Plimpton Prize for fiction. Percy currrently writes GREEN ARROW and TEEN TITANS for DC Comics.