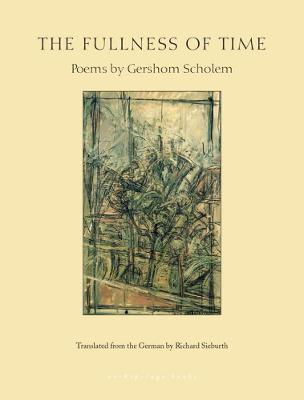 A bilingual collection of poetry from pioneering scholar in Kabbalah and Jewish Mysticism, Gershom Scholem.

With this volume, Scholem's work reaches beyond the confines of the academy and enters a literary dialogue with writers and philosophers like Walter Benjamin and Hans Jonas.

Gershom Scholem's The Fullness of Time contains dark, lucid political poems about Zionism and assimilation, parodies of German and Jewish philosophers, and poems to writers and friends such as Walter Benjamin, Hans Jonas, Ingeborg Bachmann, S. Y. Agnon, among others. The earliest poems in this volume begin in 1915 and extend to 1967, revealing how poetry played a formative role in Scholem's early life and career. This collection is translated by Richard Sieburth, who comments, "Scholem's acts of poetry still speak to us (and against us) to this very day, simultaneously grounded as they are in the impossibly eternal and profoundly occasional." The volume is edited and introduced by Steven M. Wasserstrom, who carefully situates the poems in Scholem's historical, biographical, and theological landscape.

» Have you read this book? We'd like to know what you think about it - write a review about Greetings From Angelus book by Gershom Scholem and you'll earn 50c in Boomerang Bucks loyalty dollars (you must be a Boomerang Books Account Holder - it's free to sign up and there are great benefits!)

Gershom Scholem was born in Berlin in 1897 and settled in Jerusalem in 1923. For years he was Professor of Jewish Mysticism at the Hebrew University. Many regard Scholem as the founder of the modern academic study of Kabbalah. His many books include Major Trends in Jewish Mysticism, On the Kabbalah and Its Symbolism, Sabbatai Sevi- The Mystical Messiah, and Walter Benjamin- The Story of a Friendship. He died in 1982. About Translator- Richard Sieburth teaches Comparative Literature at New York University. His translations include Friedrich Holderlin's Hymns and Fragments, Michel Leiris's Nights as Day, Walter Benjamin's Moscow Diary, GUrard de Nerval's Selected Writings, and Maurice Scove's Delie. His English edition of Nerval won the 2000 PEN Book-of- the-Month-Club Translation Prize.

A Preview for this title is currently not available.
More Books By Gershom Scholem
View All