The Griffin and the Dinosaur

How Adrienne Mayor Discovered a Fascinating Link Between Myth and Science

Description - The Griffin and the Dinosaur by Marc Aronson

Could Griffins have been real? When Adrienne Mayor carefully read the ancient Greek and Roman descriptions, this mythic hybrid of a lion and an eagle sounded like something people had actually seen. What could explain that evidence? After a decade of hunting through myths, poring over old maps, and tracing the discoveries of modern dinosaur hunters, she found the answer: awesome dinosaur fossils observed by ancient gold-hunters in the Gobi desert. Here is the story of one insightful, curious, and determined woman who solved the mystery of the Griffin, and invented a new science. Now she and others travel the world matching myths and fossils.

Buy The Griffin and the Dinosaur by Marc Aronson from Australia's Online Independent Bookstore, Boomerang Books.

Other Editions - The Griffin and the Dinosaur by Marc Aronson 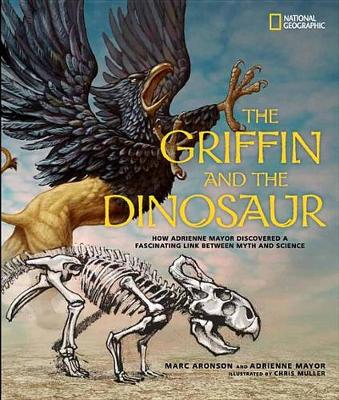 Book Reviews - The Griffin and the Dinosaur by Marc Aronson

» Have you read this book? We'd like to know what you think about it - write a review about Griffin and the Dinosaur book by Marc Aronson and you'll earn 50c in Boomerang Bucks loyalty dollars (you must be a Boomerang Books Account Holder - it's free to sign up and there are great benefits!)

ADRIENNE MAYOR is an independent folklorist/historian of science who investigates natural knowledge contained in pre-scientific myths and oral traditions. The Poison King is Mayor's latest book, and won top honors (Gold Medal) for Biography, Independent Publishers' Book Award 2010. It is a 2009 National Book Award Finalist. The History Channel's "Ancient Monster Hunters" is based on Mayor's first book. Co-author MARC ARONSON is an award-winning author and editor who earned his doctorate in American History at NYU. A prolific author, a blogger for SLJ, and an innovative thinker on children's book subjects, Marc brings deep knowledge of how kids relate to information.

A Preview for this title is currently not available.
More Books By Marc Aronson
View All