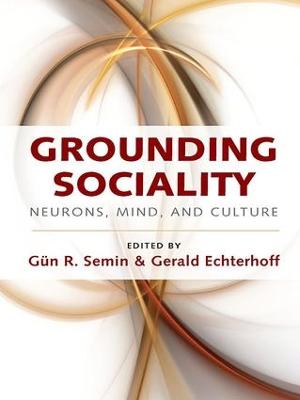 This volume concerns the longstanding intellectual puzzle of how individuals overcome their biological, neural, and mental finitude to achieve sociality. It explores how humans take each other into account, coordinate their actions, and are able to share their inner states and to communicate.

Sophisticated views on the bases of sociality are detailed at the level of neural mechanisms, perception and memory, motivation, communication and dialog, culture, and evolution. These insights have been inspired by major strides and exciting new developments in disciplines as far afield as ethology, evolutionary ecology, neuroscience, cognition, memory, developmental and social psychology, psycholinguistics, philosophy, robotics, and sociology. The volume is the first to bridge these disciplinary boundaries to lay the foundations for an integrated and general conceptualization of the bases of sociality and its implications for psychology. Each contribution presents different levels of the grounding of sociality and will further stimulate novel approaches to linking different layers of sociality, from the neural to the cultural level. 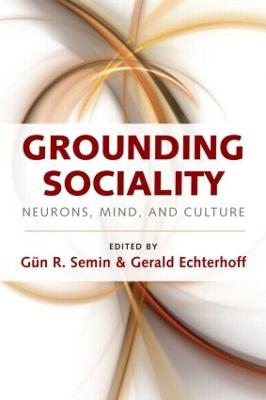 » Have you read this book? We'd like to know what you think about it - write a review about Grounding Sociality book by Gun R. Semin and you'll earn 50c in Boomerang Bucks loyalty dollars (you must be a Boomerang Books Account Holder - it's free to sign up and there are great benefits!)

Gun Semin is an Academy Professor with The Netherlands Royal Academy of Arts and Sciences at Utrecht University. He has previously served as Professor and Chair of the Department of Social Psychology at the Free University (1990-2004), where he also was the Research Director (2000-2003) of the Faculty of Psychology and Education. He was also the founding Scientific Director of the Kurt Lewin Institute (1992-1996), the inter-university graduate school in social psychology and its applications and was Chair of the Standing Committee on Social Sciences (SCSS) of the European Science Foundation. His main research interest is in embodied social cognition, communication and language - aside from specific research projects he is currently running on affect and affective processes and action-perception link. He is a widely published author and has developed a linguistic model, which has resulted in the study of language and social cognition. Further information about his research and publications can be obtained via http://cratylus.org/ . Gerald Echterhoff, Dr. habil., Ph.D. (New School for Social Research, New York, 2000), holds a full professorship for social psychology at Munster University, Germany. Before he was a postdoctoral fellow at Columbia University (2001-2002), assistant professor (wiss. Assistent) at Bielefeld University, Germany (2004-2008), visiting professor at the University of Cologne, Germany (2008), and professor of psychology at Jacobs University Bremen, Germany. His research interests include interpersonal communication, shared reality, social influence on memory and judgment, social cognition, and cultural contexts of remembering. In a signature field of investigation, his lab group studies how audience-oriented communication shapes speakers' own memory and thinking. His research has been published in leading international journals such as Journal of Experimental Psychology: General, Journal of Personality and Social Psychology, Psychological Science, Perspectives on Psychological Science, and Social Cognition. He is editor of several volumes including "Kontexte und Kulturen des Erinnerns [Contexts and Cultures of Remembering]" (with Martin Saar; 2002). Also see http://geraldechterhoff.com .

A Preview for this title is currently not available.
More Books By Gun R. Semin
View All