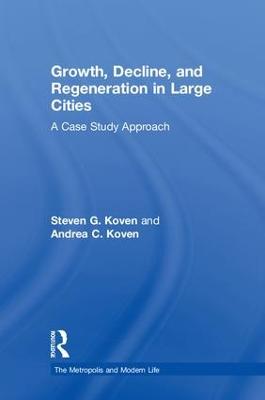 Growth, Decline, and Regeneration in Large Cities sheds light on why some cities prosper, others implode, and still others are able to reverse their downward trajectories. The book focuses on four major case studies of American metropolitan areas: Detroit, Boston, Minneapolis, and Austin. It explores how distinctive political and cultural forces in these cities affected economic growth or decline. Theoretical frameworks to explain economic development in urban areas are identified. The book addresses important subjects such as response to deindustrialization, disruption caused by gentrification, globalization, and the importance of human capital for economic development.

Other Editions - Growth, Decline, and Regeneration in Large Cities by Steven G. Koven » Have you read this book? We'd like to know what you think about it - write a review about Growth, Decline, and Regeneration in Large Cities book by Steven G. Koven and you'll earn 50c in Boomerang Bucks loyalty dollars (you must be a Boomerang Books Account Holder - it's free to sign up and there are great benefits!)

A Preview for this title is currently not available.
More Books By Steven G. Koven
View All

Entrepreneurship and Economic Development: The People and their Environment
$140.40 $156.00