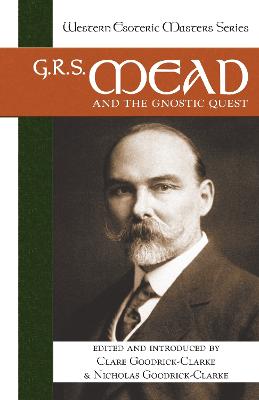 George Robert Stowe Mead (1863-1933) was a major translator, editor, and commentator on Gnostic and hermetic literature and thus a pivotal figure linking the late 19th-century esoteric revival to 20th-century art, literature, and psychology. As a young convert to the new movement of theosophy, he served as private secretary to its co-founder, Helena Petrovna Blavatsky, and after founding the European section of the Theosophical Society edited its London journal, Lucifer, for many years. Mead's initial interest in theosophy and Hinduism soon blossomed into a lifelong and wide-ranging engagement with the texts of Gnosticism, neo-Platonism, and hermeticism. His editions and commentaries on previously inaccessible sources became standard works before the First World War and an important source of inspiration to such figures as Jung, Ezra Pound, Yeats, and Robert Duncan. A new entry in the Western Masters Series of concise biographies noting key figures in the Western esoteric tradition, G.R.S. Mead and the Gnostic Quest introduces Mead's life, works, and influences, combining a substantial biography with a collection of his most important writings.

» Have you read this book? We'd like to know what you think about it - write a review about Grs Mead book by Clare Goodrick-Clarke and you'll earn 50c in Boomerang Bucks loyalty dollars (you must be a Boomerang Books Account Holder - it's free to sign up and there are great benefits!)

Claire Goodrick-Clarke, a homeopathic practitioner in Devon, England has a long-standing interest in Gnosticism and Western Esotericism. She has published articles on Comenius, Justinus Kerner and the Seeress of Prevost, and G.R.S. Mead, and she is currently working on Samuel Hahnemann and the history and practice of alchemy. Nicholas Goodrick-Clarke, General Editor of the "Western Esoteric Masters" "Series" is Professor of Western Esotericism at the University of Exeter and director of its Centre for the Study of Esotericism. He has published studies on Paracelsus, John Dee, Cornelius Agrippa, Emanuel Swedenborg, and Helena Blavatsky. His pioneering work" The Occult Roots of Nazism" has been translated into nine languages.