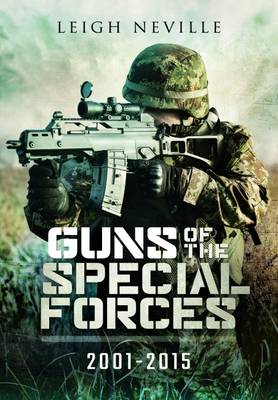 ***AUSTRALIAN AUTHOR*** In the years since 9/11 Special Forces of many nations have been in almost constant action in covert, high risk operations around the globe. These include the two long conflicts in Iraq and Afghanistan, fighting nationalist insurgents and jihadist terrorists, as well as other lesser known operations. The weapons used by SF are a constant source of interest and speculation, as are SF training, methods and vehicles. The armouries of these elite units have developed rapidly to meet their demands and the ever more sophisticated threat. They include for example suppressed piston-driven carbines, programmable grenade launchers that airburst behind hidden enemy and sniper rifles of extreme accuracy and range. This highly researched book gives the reader a privileged insight into this secret world exploring the custom-built weapons that operators carry on capture/kill missions in the 21st Century. AUTHOR: Leigh Neville has numerous published works on modern military subjects with a particular focus on Special Forces. He is an authority on war-gaming. He lives near Sydney, Australia SELLING POINTS: . Detailed pictorial record of international elite forces. . Special Forces have worldwide appeal. . Covers all types of weapons from side arms to machine guns. . Written and compiled by expert published author. 200 colour and b/w images

» Have you read this book? We'd like to know what you think about it - write a review about Guns of Special Forces 2001 - 2015 book by Leigh Neville and you'll earn 50c in Boomerang Bucks loyalty dollars (you must be a Boomerang Books Account Holder - it's free to sign up and there are great benefits!)

Leigh Neville is an Australian author who has written over a dozen titles on modern special operations forces, small arms, sniping and the wars in Afghanistan and Iraq. He has also consulted on military topics for several wargame companies and television documentary makers. After working as a consultant for a number of international firms, Leigh became a full-time writer in 2014. He has written books for Osprey Publishing and Pen & Sword along with magazine articles for History of War and Real Crime magazines. He has also developed wargame rules for Ambush Alley Games, Too Fat Lardies and served as technical consultant for Warfighter from DVG Games. He lives in Sydney with his wife and two dogs. He can be contacted via his website at www.leighneville.com.