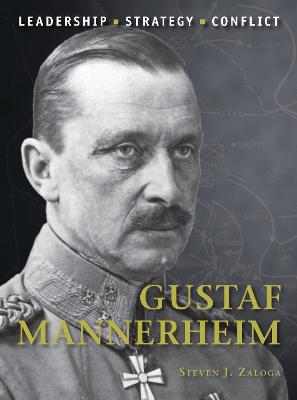 Carl Gustaf Emil Mannerheim is a legendary figure, whose life and career were deeply influential in Finnish and European history. He is viewed by many as the father of modern Finland after leading the 'White' faction to victory and independence in the Finnish Civil War of 1918. He then commanded his country's forces in a sequence of bitter clashes in the ice and snow, in the build-up to, and during, World War II: the Winter War in 1939-40, the Continuation War in 1941-44 and the Lapland War in 1944-45. This study provides a fascinating insight into Mannerheim's career, analysing his traits, his biggest victories and his key enemies. Complete with uniform artwork and detailed tactical maps, it is a comprehensive guide to one of the 20th century's most capable military leaders and statesmen.

» Have you read this book? We'd like to know what you think about it - write a review about Gustaf Mannerheim book by Steven J. Zaloga and you'll earn 50c in Boomerang Bucks loyalty dollars (you must be a Boomerang Books Account Holder - it's free to sign up and there are great benefits!)

Steven J. Zaloga received his BA in History from Union College and his MA from Columbia University. He has worked as an analyst in the aerospace industry for over two decades, covering missile systems and the international arms trade, and has served with the Institute for Defense Analyses, a federal think tank. He is the author of numerous books on military technology and military history, with an accent on the US Army in World War II as well as Russia and the former Soviet Union.