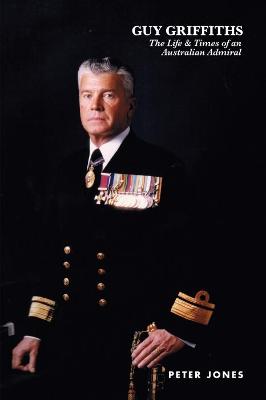 Guy Griffiths: The Life & Times of an Australian Admiral

Description - Guy Griffiths: The Life & Times of an Australian Admiral by Peter Jones

In his long career in the Royal Australian Navy, Guy Griffiths participated in its emergence from Depression-era stricture, pre-World War II, to its reinvention in the 1950s and 60s as a capable middle-power force centred on aircraft carriers in the missile age. In this time, he personally experienced the RAN's darkest days in the face of the Japanese onslaught and its fi nest hour in the Philippines Campaign of World War II, and its close involvements in the Korean War and then the Vietnam War. He witnessed the realities of war in positions of increasing responsibility.

"From country boy to gold-braided admiral, Guy Griffiths has led a richly-textured life of service to the navy and the nation. As a teenage midshipman he survived the disastrous sinking of the battlecruiser HMS Repulse off Malaya in 1941 and went on to fight at sea with distinction in another two wars: Korea and Vietnam. It is an unmatched record of courage, dedication and achievement. This is the enthralling biography of a remarkable sailor and a genuinely great Australian." - Mike Carlton AM, bestselling author of Flagship& First Victory

» Have you read this book? We'd like to know what you think about it - write a review about Guy Griffiths: The Life & Times of an Australian Admiral book by Peter Jones and you'll earn 50c in Boomerang Bucks loyalty dollars (you must be a Boomerang Books Account Holder - it's free to sign up and there are great benefits!)


A Preview for this title is currently not available.
More Books By Peter Jones
View All