The Habit of Murder

Description - The Habit of Murder by Susanna Gregory

For the twentieth anniversary of the start of the Matthew Bartholomew series, Sphere is delighted to reissue all of the medieval monk's cases with beautiful new series-style covers.------------------------------------The twenty third chronicle of Matthew Bartholomew. In 1360 a deputation from Cambridge ventures to the Suffolk town of Clare in the hope that the wealthy Elizabeth de Burgh has left a legacy to Michaelhouse. Yet when they arrive they discover that the report of her death is false and that the college seems destined for bankruptcy.Determined to see if some of its well-heeled citizens can be persuaded to sponsor Michaelhouse, Matthew Bartholomew, Brother Michael and Master Langelee become enmeshed in the town's politics. They quickly discover that a great many other people in Clare have recently met untimely deaths. These killings, combined with the arrogance Lady de Burgh has shown over the refurbishment of the church and the grotesque behaviour of some of her entourage, have created a dangerous restlessness in the town: an atmosphere intensified when yet more murders occur.One of the victims is a fellow traveller of the Michaelhouse contingent, and Matthew Bartholomew and Brother Michael feel honour-bound to identify his killer. It is a hunt which takes them deep into Clare's murky foundations and which threatens their own survival as well as that of their beloved college.'A first-rate treat for mystery lovers' (Historical Novels Review)'Susanna Gregory has an extraordinary ability to conjure up a strong sense of time and place' (Choice)

Other Editions - The Habit of Murder by Susanna Gregory 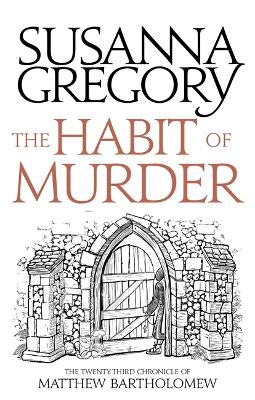 Book Reviews - The Habit of Murder by Susanna Gregory

» Have you read this book? We'd like to know what you think about it - write a review about Habit of Murder book by Susanna Gregory and you'll earn 50c in Boomerang Bucks loyalty dollars (you must be a Boomerang Books Account Holder - it's free to sign up and there are great benefits!)

Susanna Gregory was a police officer in Leeds before taking up an academic career. She has served as an environmental consultant, worked seventeen field seasons in the polar regions, and has taught comparative anatomy and biological anthropology. She is the creator of the Matthew Bartholomew series of mysteries set in medieval Cambridge and the Thomas Chaloner adventures in Restoration London, and now lives in Wales with her husband, who is also a writer.

A Preview for this title is currently not available.
More Books By Susanna Gregory
View All

The Sanctuary Murders: The Twenty-Fourth Chronicle of Matthew Bartholomew
$59.49 $66.10