Hack in a Flak Jacket

Description - Hack in a Flak Jacket by Peter Stefanovic

'Flak jackets are dreadful things. Sure, they have a purpose, and if one ever stopped a bullet or piece of shrapnel from spearing into my vital organs, I would kiss it, hang it up, and frame it. But that hasn't happened, yet.'For almost ten years Peter Stefanovic was Channel Nine's foreign correspondent in Europe, the US, Africa and the Middle East. During that time he witnessed more than his fair share of death and destruction, and carried the burden of those images - all while putting his own personal safety very much in the firing line. From flak jackets to tuxedos. From the funerals of world leaders and icons, to war zones and natural disasters. This is a thrilling account of a life lived on camera, delivering the news wherever it happens, whatever the risk.

Other Editions - Hack in a Flak Jacket by Peter Stefanovic 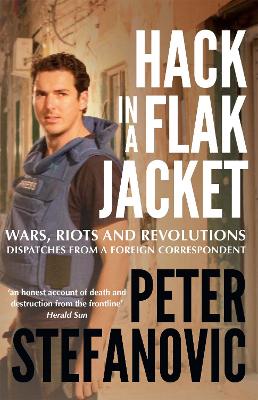 Book Reviews - Hack in a Flak Jacket by Peter Stefanovic

» Have you read this book? We'd like to know what you think about it - write a review about Hack in a Flak Jacket book by Peter Stefanovic and you'll earn 50c in Boomerang Bucks loyalty dollars (you must be a Boomerang Books Account Holder - it's free to sign up and there are great benefits!)

Peter Stefanovic was the Europe, United States, Africa, and Middle East correspondent for the Nine Network. He reported from the scene of major news events around the world for NINE NEWS, the TODAY show, and A CURRENT AFFAIR. In 2014 Peter was nominated for a Walkley Award for his coverage of the war in Gaza. He is currently the co-host of WEEKEND TODAY and a contributor to 60 MINUTES. https://twitter.com/peterstefanovic https://instagram.com/peter_stefanovic