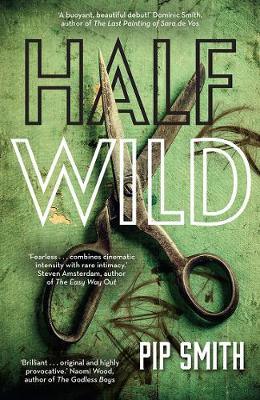 Description - Half Wild by Pip Smith

'Pip Smith has always been an agent of change. With her powerful debut novel, Half Wild, she will surely change the way we read, write, think and talk about Australian fiction.'
Sam Twyford-Moore, host of The Rereaders podcast and former director of the Emerging Writers' Festival

Sydney, 1938. After being hit by a car on Oxford Street, sixty-three-year-old Jean Ford lies in a coma in Sydney Hospital. Doctors talk across her body, nurses jab her in the arm with morphine, detectives arrive to take her fingerprints. She has GBP100 in her pocket, but no identification. Memories come back to her - a murder trial, a life in prison - but with each prick of the needle her memories begin to shift.

Wellington, 1885. Tally Ho doesn't need to go to school because she is going to be a fisherman or a cart driver or a butcher boy like Harry Crawford. Wellington is her town and she makes up the rules. Papa takes her fishing, Nonno teaches her how to jump fences on his horse Geronimo - life gallops on the way it should, until a brother, baby William, is born. 'Go and play with your sisters,' Papa says, but wearing dresses and sipping tea is not the life for Tally Ho. Taking the advice of her hero, Harry Crawford, she runs away.

Sydney, 1917. The burned body of a woman is discovered on the banks of the Lane Cove River. Was she a mad woman? A drunk who'd accidentally set herself on fire? Nobody knows, until-three years later - a tailor's apprentice tells police that his mother went missing that same weekend, and that his stepfather, Harry Crawford, is not who he seems to be. Who, then, is he?

Based on the true lives of Eugenia Falleni, Half Wild is Pip Smith's dazzling debut novel.

» Have you read this book? We'd like to know what you think about it - write a review about Half Wild book by Pip Smith and you'll earn 50c in Boomerang Bucks loyalty dollars (you must be a Boomerang Books Account Holder - it's free to sign up and there are great benefits!)

Pip is a writer of songs, poems and stories. Her first poetry collection, Too Close for Comfort (SUP), won the Helen Ann Bell Award in 2013. She ran the monthly writing event Penguin Plays Rough, for which she published and edited the multimedia anthology, The Penguin Plays Rough Book of Short Stories. She was a Faber Academy Writing a Novel scholarship recipient, has been a co-director of the National Young Writers' Festival, and holds a doctorate in creative arts from Western Sydney University. She is one quarter of garage-punk band Imperial Broads and works in a bookshop.