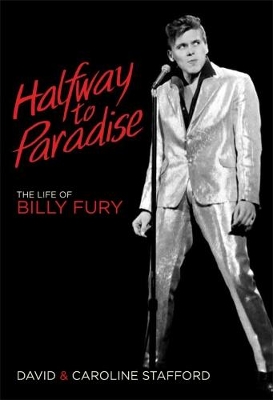 The Life of Billy Fury

David and Caroline Stafford guide the reader through Billy's troubled childhood in Liverpool, via gold and silver lame, to his later years as a farming ornithologist, and his comeback cut short by his premature death. Billy Fury was a key figure on that watershed between post-war privations and sixties excess. He knew everybody, auditioned the Beatles to be his backing band, met and outhandsomed Elvis, partied with Keith Moon and hosted acid parties. Yet, throughout the mayhem, he always remained true to himself- diffident and amused. Halfway To Paradise tells the full story with the compassion and affection due to an artist who, decades after his death, still has the power to command admiration and adoration

» Have you read this book? We'd like to know what you think about it - write a review about Halfway to Paradise book by David Stafford and you'll earn 50c in Boomerang Bucks loyalty dollars (you must be a Boomerang Books Account Holder - it's free to sign up and there are great benefits!)

David and Caroline Stafford have collaborated on scores of dramas, documentaries and comedy series for radio and TV over the years, as well as writing biographies of Randy Newman, Adam Faith and Kenny Everett. Their first book together, Fings Aint Wot They Used T'Be, about the composer Lionel Bart was chosen as BBC Radio 4's Book of The Week, nominated for a Sheridan Morley Award and adapted for the BBC4 television documentary Reviewing The Situation.

A Preview for this title is currently not available.
More Books By David Stafford
View All