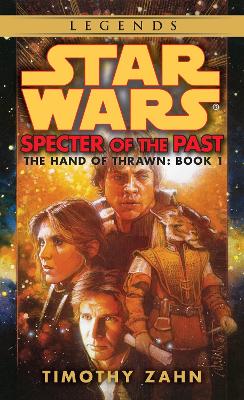 Hugo Award-winning author Timothy Zahn makes his triumphant return to the Star Wars(r) universe in this first of an epic new two-volume series in which the New Republic must face its most dangerous enemy yet--a dead Imperial warlord.

The Empire stands at the brink of total collapse. But they have saved their most heinous plan for last. First a plot is hatched that could destroy the New Republic in a bloodbath of genocide and civil war. Then comes the shocking news that Grand Admiral Thrawn--the most cunning and ruthless warlord in history--has apparently returned from the dead to lead the Empire to a long-prophesied victory. Facing incredible odds, Han and Leia begin a desperate race against time to prevent the New Republic from unraveling in the face of two inexplicable threats--one from within and one from without. Meanwhile, Luke teams up with Mara Jade, using the Force to track down a mysterious pirate ship with a crew of clones. Yet, perhaps most dangerous of all, are those who lurk in the shadows, orchestrating a dark plan that will turn the New Republic and the Empire into their playthings.

» Have you read this book? We'd like to know what you think about it - write a review about Hand Of Thrawn 01 book by Timothy Zahn and you'll earn 50c in Boomerang Bucks loyalty dollars (you must be a Boomerang Books Account Holder - it's free to sign up and there are great benefits!)

Timothy Zahn is the author of more than forty novels, nearly ninety short stories and novellas, and four short-fiction collections. In 1984, he won the Hugo Award for best novella. Zahn is best known for his Star Wars novels (Heir to the Empire, Dark Force Rising, The Last Command, Specter of the Past, Vision of the Future, Survivor's Quest, Outbound Flight, Allegiance, Choices of One, and Scoundrels), with more than four million copies of his books in print. Other books include the Cobra series, the Quadrail series, and the young adult Dragonback series. Zahn has a B.S. in physics from Michigan State University and an M.S. from the University of Illinois. He lives with his family on the Oregon coast.