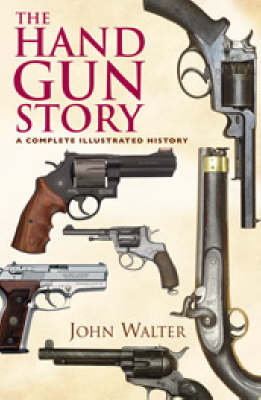 The Handgun Story traces the fascinating history of the 'one hand gun' from its crude fourteenth-century origins to the sophisticated products of today. As technology has progressed, handguns have got smaller and deadlier, to be carried in holsters, pockets and even lady's mufflers. Today they are the weapons of choice for undercover agents and would - be assassins; ideally suited for both attack and self-defence. The earliest pistols had a tendency to misfire, but this was cured by the cap-lock. Cap-lock revolvers proved a massive success in the American Civil War with hundreds of thousands used on each side. Self-contained metal-case cartridges were to bring a fundamental change to handgun design: not only by allowing the introduction of revolvers that ejected automatically or were easily reloaded, but also by paving the way for the automatic pistol. World War I provided the handgun with a proving ground. At the end of the hostilities, with so much surplus weaponry, work on the handgun could have ceased; instead, a new developmental phase was begun by the nations that had emerged from the crumbling Imperial empires. During World War II the efficiency of well-established designs was confirmed and new designs, such as the Walther P. 38, showed their potential. The emergence of the submachine-gun in 1945 reduced the status of the handgun - but only temporarily. The need for efficient self-defence shows no signs of lessening; and the rise in shooting for sport, particularly with the revolver, has sharpened the quest for efficiency. The never ending search for advanced production techniques shows that the handgun has as much a future in the twenty-first century as it had in the heyday of the Wild West, or in the trenches of Passchendaele. sales Detailed examination of the gtuns and manufacturers Fully-illustrated with more than 100 photographs and diagrams Written by a world authority on handguns Author John Walter is the author of more than 60 books including The Guns that Won the West and Military Handguns of Two World Wars

» Have you read this book? We'd like to know what you think about it - write a review about Handgun Story book by John Walter and you'll earn 50c in Boomerang Bucks loyalty dollars (you must be a Boomerang Books Account Holder - it's free to sign up and there are great benefits!)


A Preview for this title is currently not available.
More Books By John Walter
View All