Handprints on Hubble: An Astronaut's Story of Invention

Description - Handprints on Hubble: An Astronaut's Story of Invention by Kathryn D. Sullivan

The first American woman to walk in space recounts her experience as part of the team that launched, rescued, repaired, and maintained the Hubble Space Telescope.

The Hubble Space Telescope has revolutionized our understanding of the universe. It has, among many other achievements, revealed thousands of galaxies in what seemed to be empty patches of sky; transformed our knowledge of black holes; found dwarf planets with moons orbiting other stars; and measured precisely how fast the universe is expanding. In Handprints on Hubble, retired astronaut Kathryn Sullivan describes her work on the NASA team that made all of this possible. Sullivan, the first American woman to walk in space, recounts how she and other astronauts, engineers, and scientists launched, rescued, repaired, and maintained Hubble, the most productive observatory ever built.
Along the way, Sullivan chronicles her early life as a "Sputnik Baby," her path to NASA through oceanography, and her initiation into the space program as one of "thirty-five new guys." (She was also one of the first six women to join NASA's storied astronaut corps.) She describes in vivid detail what liftoff feels like inside a spacecraft (it's like "being in an earthquake and a fighter jet at the same time"), shows us the view from a spacewalk, and recounts the temporary grounding of the shuttle program after the Challenger disaster.
Sullivan explains that "maintainability" was designed into Hubble, and she describes the work of inventing the tools and processes that made on-orbit maintenance possible. Because in-flight repair and upgrade was part of the plan, NASA was able to fix a serious defect in Hubble's mirrors-leaving literal and metaphorical "handprints on Hubble."
Handprints on Hubble was published with the support of the MIT Press Fund for Diverse Voices.

Other Editions - Handprints on Hubble: An Astronaut's Story of Invention by Kathryn D. Sullivan 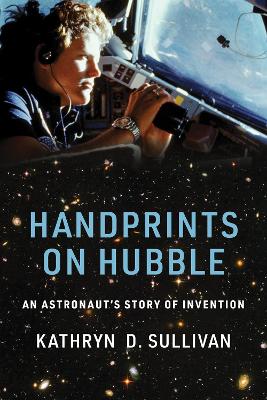 » Have you read this book? We'd like to know what you think about it - write a review about Handprints on Hubble: An Astronaut's Story of Invention book by Kathryn D. Sullivan and you'll earn 50c in Boomerang Bucks loyalty dollars (you must be a Boomerang Books Account Holder - it's free to sign up and there are great benefits!)


A Preview for this title is currently not available.
More Books By Kathryn D. Sullivan
View All