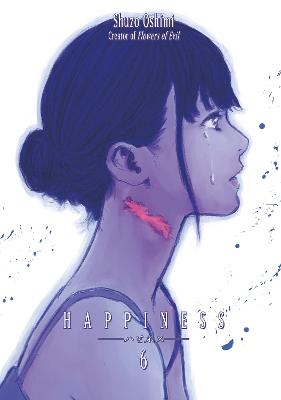 A supernatural story of sexual awakening, growing up, and suburban vampirism, Happiness follows a dorky boy who is attacked by a girl in an alley. She sucks his blood and gives him a choice- life or death. He chooses life, but finds himself nearly overwhelmed by a new thirst and a fascination with the necks of his classmates...

Praise for Flowers of Evil-
"A shockingly readable story that vividly--one might even say queasily--evokes the fear and confusion of discovering one's own sexuality. Recommended." -The Manga Critic

"By loving this manga I recognize what a sick and twisted individual I have become. While I can still say that I am not truly deviant, Flowers of Evil is a great reminder of my own thirst for power and my own personal corruption." -Otaku Champloo

» Have you read this book? We'd like to know what you think about it - write a review about Happiness 6 book by Shuzo Oshimi and you'll earn 50c in Boomerang Bucks loyalty dollars (you must be a Boomerang Books Account Holder - it's free to sign up and there are great benefits!)

At only 30 years of age, Shuzo Oshimi is already considered a seasoned veteran of the Japanese comics community. Winner of the most important comics awards for newcomers, the Tetsuya Chiba Award in 2001, Oshimi has been penning quirky slice-of-life dramas now for a decade for major manga publishers such as Kodansha and Futabasha. Raised in the slow laid back hills of Gunma, in mid-eastern Japan, Oshimi wished to someday escape his community for bigger pastures. Living solely off of comics and books, he is a man of words and that shows in his very humanist stories. While he has drawn nine series in the past decade, Oshimi's star began to climb just recently in 2008 with the release of his first hit Drifting Net Cafe. This horror-themed homage to the legendary Kazuo Umezzu work, Drifting Classroom, was adapted into a live action series and propelled Oshimi onto an international stage. He would soon reach new heights in 2009 with his most recent series Flowers of Evil. In 2010 and 2011, the property quietly landed on numerous must read lists and has helped revitalize the shonen genre.

A Preview for this title is currently not available.
More Books By Shuzo Oshimi
View All