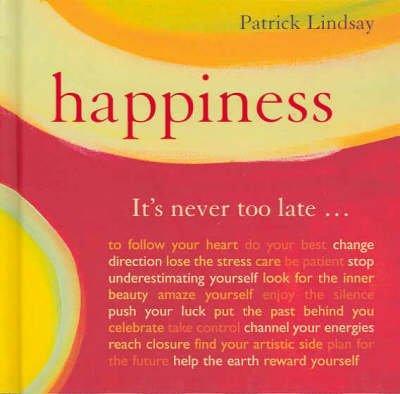 It's never too late... To follow your heart... To walk barefoot... To assert yourself... To celebrate... To be happy. It's an oft-proven adage that it's never too late to do all those inspirational, encouraging, positive things for ourselves that we put off because the routines of everyday life get in the way. Sometimes it takes just a gentle reminder of small things we can do to make our lives more enjoyable and satisfying - 'Happiness' is that reminder. In his second book in the "It's Never Too Late" series, Patrick Lindsay shows us in inspirational yet practical ways how it's never too late to make your life the one you've always wanted to live, how simple things we can do can make us happy. Organised with a thought per page and coupled with inspirational quotes, 'Happiness' will inspire you to look at your life anew.

» Have you read this book? We'd like to know what you think about it - write a review about Happiness:It's Never Too Late book by Patrick Lindsay and you'll earn 50c in Boomerang Bucks loyalty dollars (you must be a Boomerang Books Account Holder - it's free to sign up and there are great benefits!)

After a long career as a print and television journalist, Patrick Lindsay has also become one of Australia's leading non-fiction authors. Among his published books are: The Spirit of Kokoda (Hardie Grant), the story of the battles which saved Australia in WWII; TheEssence of Kokoda, a concise guide to the Kokoda story; The Spirit of Gallipoli. Cosgrove... Portrait of a Leader; Kokoda Spirit exploring the spirit of the Diggers of Kokoda in words and images; and The Coastwatchers covering the story of the remarkable band of men and women who reported on the Japanese operations, many from behind enemy lines, during WWII. Prior to writing full time, Patrick spent 20 years in network television as a reporter, presenter, producer and writer. During that time he had leading roles on the Nine Network, Foxtel's Lifestyle Channel and the Seven Network. He has also reported, written and presented documentaries and feature series in Los Angeles, New York, Hawaii, France, Japan, Thailand, New Zealand, London, Romania and Papua New Guinea. He wrote and directed the acclaimed documentaries, Kokoda... the Bloody Track and Kokoda... The Last Parade. Patrick devised the format for the highly-successful documentary TV series, In Their Footsteps, broadcast on the Nine Network in 2011. Patrick is a founding director and Chairman of the Kokoda Track Foundation Ltd (see www.ktf.ngo), an Australian philanthropic organisation that aims to repay the selfless help given to Australia during World War II by the beloved Fuzzy Wuzzy Angels of Papua New Guinea by helping to improve the lives and futures of their descendants. In 2015, Patrick was named a Member of the Order of Australia for 'significant service to the media as a television presenter and journalist, to international relations, and to literature as an author'. Patrick and his wife Lisa Cotton live in Sydney. He has three grown-up children, Nathan, Kate and Sarah and one grandson, Lucas.

A Preview for this title is currently not available.
More Books By Patrick Lindsay
View All

The Interest of Scotland Considered, with Regard to Its Police in Imploying of the Poor, Its Agriculture, Its Trade, Its Manufactures, and Fisheries.
$63.37 $70.41